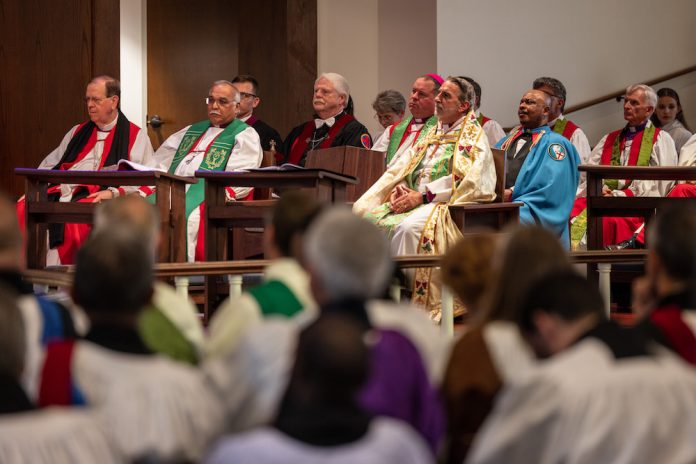 North American Anglicans meeting this June for their annual Provincial Council were challenged to advocate for vulnerable Global South Christians and stand for Gospel truth. Delegates received reports from church officials addressing investigations of the mishandling of sexual abuse allegations in the Diocese of the Upper Midwest and overall slipping attendance numbers attributed to COVID.

Among the largest parishes in the Anglican Church in North America (ACNA), The Falls Church Anglican of Falls Church, Virginia outside of Washington, D.C. hosted the Council June 14-16 in a sanctuary consecrated in 2019 following the loss of a $40 million 250-year-old historic church property in litigation with the Episcopal Church.

The Falls Church is part of a larger story in which departing Anglicans have mostly concluded lawsuits with Episcopalians in Texas and South Carolina regarding the ownership of local church properties and now begin a season free of such disputes as other challenges take shape.

Provincial Council, comprised of a bishop, elected clergy and two elected lay persons from each member diocese, is charged with producing an annual budget for the province, election of clergy and laity to serve on the Executive Committee and for review of canonical changes that ultimately require approval from a larger Provincial Assembly that convenes in 2024.

The ACNA has spent more than $350,000 in unbudgeted expenses related to investigation of sex abuse allegations against a lay leader at a now-disbanded Illinois church, “and the meter is still running” reported Archbishop Foley Beach in his opening address to the Council.

At the request of the Diocese of the Upper Midwest, the wider Province took on oversight of an investigation and the associated expense. A Provincial Response Team is also receiving and reviewing allegations of abuse of ecclesiastical power in the diocese, in which relatives of Bishop Stewart E. Ruch III served on the appointed Bishop’s Council and diocesan canons may not have been adhered to. Ruch, who characterized a failure in 2019 to tell his diocese about the allegations as a “regrettable error”, was granted a leave of absence in 2021 and has yet to return to his role of ministry oversight.

The Provincial Council approved a budget for 2023 with a further $200,000 set aside for investigations, 10 percent of the approximately $2 million annual budget for the Anglican Province that ministers across 28 dioceses in the United States, Canada, Mexico and Cuba.

In addressing the expense, Beach stated that necessary investigations and processes must be “completed in a manner consistent with biblical justice.”

The ACNA Governance Task Force presented changes to six canons regarding disciplinary charges against bishops, presbyters (priests) and deacons and voluntary resignations from holy orders, Godly Admonitions and inhibitions. Recent inhibition from ministry of Canadian Bishop Todd Atkinson of the Via Apostolica missionary district pending investigation of allegations of misconduct, including the abuse of ecclesiastical power, raised the profile of the matter. Following approval by Provincial Council, the changes require the assent of the larger ACNA Assembly.

“Our call is to shepherd God’s flock faithfully,” ACNA Chief Executive Officer Bishop Alan Hawkins said in a presentation largely focused upon Provincial response to investigations of abuse. Hawkins noted that the majority of such allegations are found to be “generally true” and that many harmed don’t step forward.

Top bishops from Pakistan and Nigeria, known as “Primates” in Anglican parlance, featured prominently at the Council, with Nigerian Archbishop Henry Ndukuba preaching at the opening service and United Church of Pakistan Bishop Moderator Azad Marshall offering a personal testimony at a concluding service of healing prayer.

ACNA, Beach stated, is in “full communion” with 60 million of the total 80 million Anglicans around the world, but will not be at the decennial Lambeth Conference of Anglican bishops this summer, the Church of England organizers of which have invited bishops “in sinful relationships.” These include Episcopal Church bishops openly in same-sex relationships from Maine, Missouri, and Michigan and an Anglican Church of Canada bishop from Ontario.

“We cannot endorse this behavior by our participation,” said Beach, who serves as the chairman of the Global Anglican Future Conference, a traditionalist renewal movement within the worldwide Anglican Communion that counts the majority of Anglican Christians among its participating churches.

The plight of Christians ministering in Islamic-majority nations was highlighted by Ndukuba and Marshall.

“We are asking for advocacy: speak out and pray,” the Nigerian Archbishop asked of the North American church, appealing to a “Pax Americana” as “defenseless women and children” are assaulted by an “Islamist agenda” that is “well-resourced.”

Ndukuba has corresponded with Archbishop of Canterbury Justin Welby, arguing that violent attacks on Christians in Nigeria’s middle belt cannot be solely ascribed to climate change as the root cause.

“We pray for the United States, this isn’t one-way traffic,” Bishop Marshall of Pakistan shared, characterizing the people of his united Protestant church as a “small, faithful church that will not compromise.” Marshall encouraged the ACNA to stand against an “onslaught of liberalism.”

Council delegates were also updated on ecumenical dialogues with the Roman Catholic Church, set to resume in-person this year following a two-year COVID pause, reported ACNA Dean for Ecumenical Affairs Bishop Ray Sutton. The bishop also touted the Aldersgate Movement of evangelical Methodists as an ecumenical partner that ACNA anticipates working with as the division of the United Methodist Church unfolds.

Among the starkest updates before the Council was an update on church membership, attendance and church planting from ACNA Canon for Communications Andrew Gross.

“Attendance has not returned to pre-2020 levels,” Gross reported, showing numbers that revealed a 30 percent decline in 2021 since pre-pandemic 2020 numbers. Membership dropped 3 percent and the net number of churches grew by two with 25 churches planted in 2021.

“The bottom line is that most of our congregations survived the pandemic and are in a season of rebuilding,” Gross stated, predicting that 2022 was going to be an important year. Unlike 2020, the vast majority of ACNA parishes were open for in-person worship the entirety of 2021, and few were closed for more than 10 weeks.

Gross shared numbers from the Pew Research Center showing the attendance trajectory of ACNA congregations was largely consistent across most U.S.-based denominations. After the most restrictive initial period of COVID guidance concluded, national church attendance increased by 10 percent from mid-2020 through spring of 2021, increasing another 21 percent from that spring through the following autumn. But that “rebound” has slowed to only a further 4 percent through spring 2022, and post-COVID some people “aren’t coming back.”

Mindful of a pending decision by the U.S. Supreme Court with the potential to overturn the Roe vs. Wade ruling that swept away state level abortion restrictions, Beach reminded the Council about the importance of human life, stating that regardless of the upcoming decision on Roe the denomination would continue to uphold the Sanctity of Life and help mothers.

“We are a pro-life church,” Beach stated, adding that there will be an ACNA statement when a decision on Dobbs v. Jackson Women’s Health Organization is handed down by the Court.

The Council received a report from Anglicans for Life, the pastoral ministry helping local churches uphold the sanctity of life from conception to natural death. Delegates shared time in prayer for pregnancy clinics vandalized following the leak of a Dobbs draft opinion in May.

Beach spoke of the need to resist cultural pressure to affirm unbiblical practices.

“The church cannot stand by and be quiet as children are exposed to lewdness,” Beach said of a recent drag queen event aimed at families in a Georgia park. “But we must treat others in the manner that we would want them to treat us.”

Delegates also heard from Falls Church Anglican Rector Sam Ferguson who preached during morning prayer, warning of the dangers of expressive individualism, which he characterized as “the height of idolatry.”

“If the local church will not teach the rock solid Word of God, where will people find it?” prompted Ferguson, asking local churches not to merely outsource teaching to Christian schools and institutes.

“A healthy local church is your main task, and everything else is downstream,” Ferguson summarized.