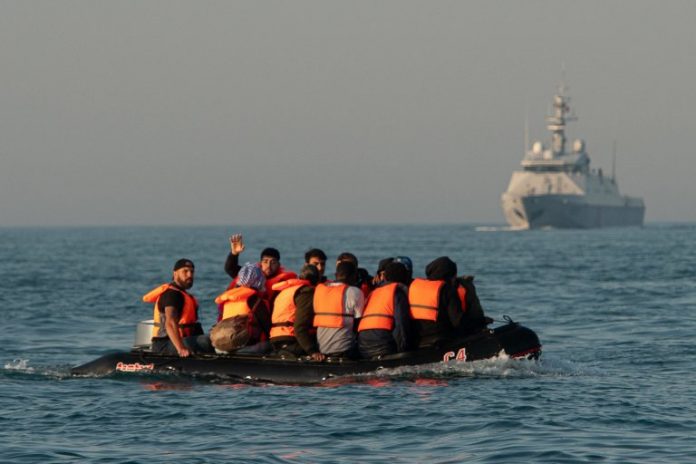 Last year 23,000 illegal migrants crossed the channel by boat, provoking angst in the UK collective conscience. Which is the worthier moral course? To accept them all, discarding the rule of law, enabling the people smugglers lucrative and evil business, or enact a gesture of discomfort and enable deportations for those who have broken the law?

The Christian (mainly Anglican) establishment say they know what God wants. Open borders, no rule of law, no limits. Others are not so sure of their theological or ethical clarity.

All this takes place in a context where the public face of Christianity is increasingly slipping towards the harder political Left. This isn’t new. It’s a tendency that’s intensified by the dominance of rationalism in relation to a solution of life in the Spirit.

In fact, this forms the basis for ‘Ashenden’s first law of metaphysics’: that the political expression of the faith of the Church is inversely proportionate to its depth of spiritual authenticity. In other words, the less real prayer, penitence and experience of God, the greater the temptation to engage in politically charged activism.

Which takes us back to Rwanda.

As with all problems, things look clearer when we define our terms. What is the difference between an economic and a political migrant?

Who is our neighbour?

What does compassion look like, and as a subdivision of that, what is the difference between soft and hard love?

What is justice when choosing between an illegal immigrant, a trafficker, a pensioner who cannot get an operation on the NHS and a migrant who has gone through the legal route?

It’s always tempting to go for the easy ones first, so let’s look at how Jesus in the Gospels helps us define our neighbour.

It’s the account of the Good Samaritan. In this profound and striking story we discover what we might always have known, and that is that the neighbour God wants us to show compassion to is the vulnerable wounded and needy person we meet on our travels. Why travels? Because anyone knows what a geographical neighbour is. And Jesus was extending geography to a personal encounter that was not limited by geography.

Mrs Thatcher infuriated the most sophisticated theologians of her time when she pointed out what every good housewife knows and every impractical socialist yearning to spend someone else’s money avoids, that to show this kind of compassion you have to have taken that trouble to save some of your money to be able to share it.

And this perhaps is the main place of departure for the rationalistic secular Left. It agrees wholeheartedly with Jesus about extending compassion beyond the boundaries of the local; but it insists on making what he described as personal, plural and therefore political; and the money comes not from your own pocket, but from other peoples’. You get the kudos for showing the compassion, but other people actually fund it.

And that’s the give-away test for applying to the so-called moral outcry of so many left-leaning church leaders. They are claiming the kudos for compassion (while lambasting the government for its moral failure) but they are not providing any solution and certainly not paying for one – either with ideological perspicacity or their own funds.

So we are entitled to ask if they are virtue-signalling with their “we are compassionate and the Government is not”.

One of the reasons Jesus concentrated on the personal and avoided the political is that salvation is fundamentally a personal matter. Of course we are judged by our behaviour towards others, but we are not judged corporately. At the end of time, the whole of humanity will stand before the risen Christ as judge and he will deal with each soul personally, not politically. This will be a matter of weighing the soul not the group, nation or body politic.

It is secular Utopianism that deals in the group and the corporate, and subsumes the personal to the collective. Christianity should rightly allow all its alarm bells to sound when its leaders start dealing conceptually in the collective.  It’s not always wrong – there are ethical generalisations to be made about societies. However it is not the primary focus of faith; that according to Jesus remains the personal soul.

But if illegal migrants don’t qualify as neighbours under the Good Samaritan test, are the political and geopolitical ethics clear and obvious?

They aren’t. It’s not clear how anyone travelling from France to the UK can claim to be in fear of life and liberty. France and the European mainland are safe and generous havens. The crossing of the channel must to some degree be a financial decision. And it’s one that reflects the astonishingly generous government commitment to offer housing and income to almost anyone who turns up on its shores.

The asylum system is so chaotic and dysfunctional that it is well known to economic migrants the world over that almost no one is deported from Britain.

That’s the reason for the unstoppable flow. That’s the foundation the people traffickers build their obscene evil empire on. There are constant accounts of migrants too impoverished to pay the traffickers up front who make a transaction to become indentured commercial slaves once in England to pay back significant sums of money over lengthening periods of time. Shouldn’t the Christian conscience be troubled by this?

How is it that the religious leaders, so frothed up in their pursuit one-sided justice and targeted compassion, are only willing to make the most simplistic of evaluations in favour of unlimited unconditional free entry for all? Why are they blind unable to see the injustice perpetrated on those migrants who have taken the legal route with all its frustrations and limitations? How does the repudiation of the law constitute “justice”? Only perhaps in the world of the solipsistic virtue-signalling imagination.

Left-leaning, anarchy-preferencing, smuggler-supporting, slavery-subsidizing, border-disdaining clerics are not the only ones capable of feeling shame at the betrayal of Christian ethics.