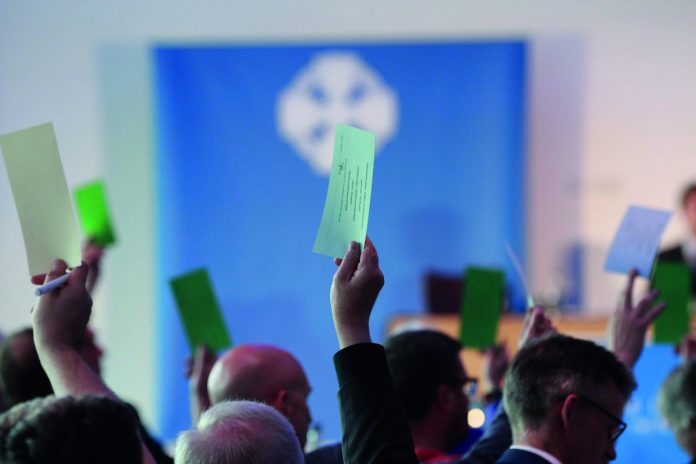 The Church in Wales today (April 28) appealed to the World Council of Churches to distance itself from members which supported the war in Ukraine.

In an emergency motion, members of the Church’s Governing Body called on the WCC to take “clear and appropriate action” to distance itself against any of its members, including the Russian Orthodox Church, who had supported the war. It also urged the WCC to call on all Christians to stand with oppressed people and to work for peace.

The Church in Wales is a member of the WCC and the motion comes ahead of the meeting of the WCC’s Central Committee in June.

Proposing the motion, the Bishop of St Asaph, Gregory Cameron, said, “I suspect that there are very few members of the Church in Wales who have not been horrified by the war of aggression started by President Putin of the Russian Federation against the peoples of Ukraine. It has been moving to see both the rallying of support for Ukraine, and for its many refugees, even here in Wales – involving members of the Church in Wales as well, of course – and also the almost universal response of support against the aggression experienced.

“The WCC has itself spoken out against the war, including voicing support for the head of the Russian Orthodox Church in Ukraine, who has been clear in his condemnation of the war. What has been disappointing has been the response of the Patriarch of Moscow himself, who has sided with President Putin, and who has become increasingly vociferous in toeing the official line.

“The Church in Wales’ view is that the war in Ukraine is an unprovoked war of aggression and we are asking the WCC to take appropriate action. We are asking Christians globally to take the stand for peace and to pray for repentance and reconciliation.”

The motion was seconded by Sir Paul Silk and was passed unanimously.

“That the Governing Body of the Church in Wales do call upon the World Council of Churches to take clear and appropriate action to distance the Council from the actions of those member churches, including the Russian Orthodox Church, who have given support to the unprovoked war of aggression against Ukraine by the Russian Federation, and call upon all Christians to stand with the oppressed and to do all in their power to work for peace.”

The Governing Body was meeting on April 27-28 in Newport.