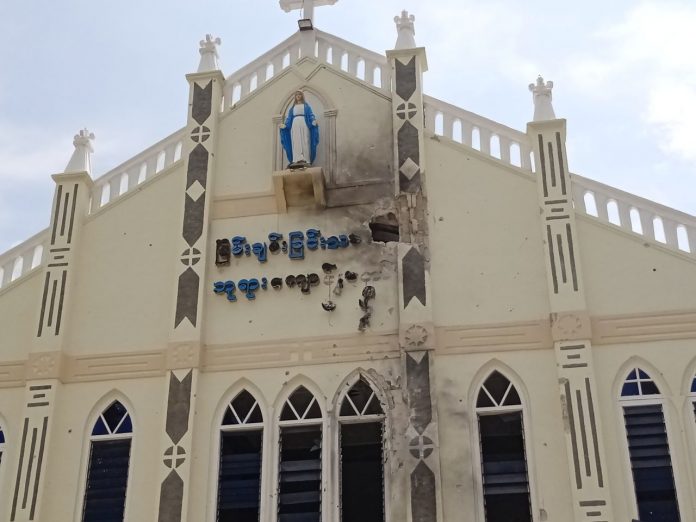 (Yangon) – About a hundred religious buildings have been destroyed by Myanmar’s military in areas where anti-coup resistance is strong, especially in the north-west and south-east of the country.

Between February 2021 and January 2022, some 35 churches and 15 affiliated buildings have been destroyed in Chin state, this according to the Chin Human Rights Organisation. During the same period, at least 12 churches were razed to the ground in Kayah State, the Karenni Human Rights Group reported.

Despite a pledge by the generals after their coup in February 2021 to protect places of worship, pagodas and monasteries have not been spared. Since April 2021, when ethnic militias began fighting back, at least 50 religious buildings were either destroyed or looted.

Earlier this month, a monastery was shelled in Latpandaw, a village in Yinmabin district (Sagaing), killing at least six people who had found refuge in it.

In the same area in late February, soldiers raided the monastery in the village of Chin Phone and used 80 children as human shields for at least 36 hours.

Now the building is being used as an interrogation centre where civilians are tortured and killed. Offering by locals, about 50 million kyat (US$ 28,100) were stolen.

According to the independent news website The Irrawaddy, the attacks on religious buildings reflect the junta’s frustration at not being able to prevail over the anti-coup forces, especially in Chin and Kayah states, despite the use of air strikes and heavy artillery.

In recent weeks, Karen state (also called Kayin), on the border with Thailand, has been the scene of intense fighting. Over the weekend, planes bombed several provinces, hitting civilian targets, including health facilities.

The Karen National Liberation Army said it did not suffer losses, claiming instead to have killed at least 60 regular soldiers, but such claims are hard to verify.

At least 150,000 civilians have been displaced in this region.