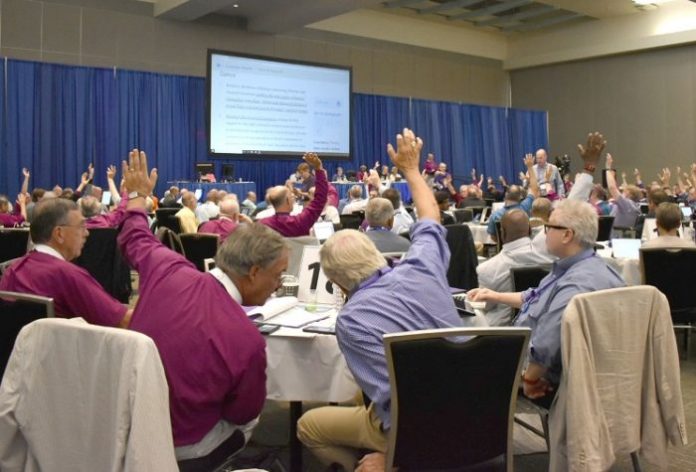 Bishops of the Episcopal Church on Friday adopted a pastoral statement critical of U.S. states that have enacted policies opposed by transgender activists, including laws banning irreversible surgeries on minors to remove healthy reproductive organs.

The Episcopal Church House of Bishops voted to adopt the resolution during an in-person spring retreat held March 15-21 at Camp Allen in Navasota, Texas. Bishops were unanimous according to a media release distributed by the Episcopal Church Office of Public Affairs.

The bishops’ statement, introduced by Episcopal Diocese of Texas Bishop Suffragan Kai Ryan, voices “love and continued support for all persons who identify as transgender or non-binary and their families.” It goes on to “decry legislative initiatives and governmental actions targeting trans children and their families.”

According to the church’s media release, Episcopal Diocese of Texas Bishop Andrew Doyle urged the naming of specific instances of alleged bigotry against persons who identify as transgender.

In February, Texas Governor Greg Abbott directed the Texas Department of Family and Protective Services to investigate any reported instances of minors “being subjected to abusive gender-transitioning procedures.”

One child abuse investigation involving the sex transition of a 16-year-old was temporarily halted by a state judge on March 2, but other investigations continue.

Transgender activists regard such surgical operations as “gender-affirming care”, while opponents cite an increasing number of “de-transitioned” persons who changed their minds and now regret lost fertility.

The bishops’ pastoral statement follows earlier resolutions enacted by the Episcopal Church General Convention in 2018 in support of persons identifying as transgender or non-binary. In one resolution, introduced by the Episcopal Diocese of California, bishops and deputies directed the church’s public policy office “to advocate for passage of federal legislation that protects transgender and gender non-conforming persons from discrimination.”

That legislation, known as the Equality Act, was passed by the U.S. House of Representatives in 2019 and 2021 but was not taken up by the U.S. Senate.

The General Convention voted to oppose “all legislation that restricts public restroom, locker room and shower access for transgender and gender non-conforming people.”

Episcopal Church embrace of transgender and non-binary identities stands apart from that of the Roman Catholic Church and the Southern Baptist Convention, America’s largest Protestant body.

“The young need to be helped to accept their own body as it was created,” Pope Francis wrote in his 2016 exhortation, Amoris Laetitia.

The Southern Baptist Convention voted in 2014 to affirm “God’s good design that gender identity is determined by biological sex and not by one’s self-perception—a perception which is often influenced by fallen human nature in ways contrary to God’s design (Ephesians 4:17–18).”