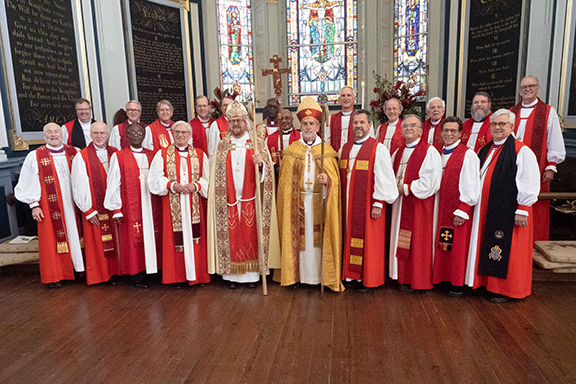 The Rt Revd Chip Edgar was consecrated Bishop of the Anglican Diocese of South Carolina at a festive service held at the Cathedral Church of St. Luke and St. Paul in Charleston, Saturday, March 12, 2022.

The service began with a lengthy processional of bishops, priests and deacons from the Anglican Diocese of South Carolina, the Diocese of the Southeast (Reformed Episcopal Church) and the Diocese of the Carolinas, as well as clergy from other dioceses, laity representing various diocesan ministries, institutions, and ministry partners.

“This gathering of people, everyone together… this is a picture of what heaven looks like,” said Edgar during the service. “There’s a kind of basking in it, that has just been overwhelming to me as the service has unfolded.”

In addition to the capacity crowd at the Cathedral, more than 1000 tuned in online from across the country and around the world to join the event.

The Rev. Dr. Jamey Graham of Saint John Baptist Church in Columbia, South Carolina, who served as preacher, said Edgar was “planted to produce.” He first recalled some of the Bishop’s early ministry “fruit,” – growing St. Mark’s Glen Ellyn, (IL) from 175 to 450 and the Church of the Apostles, Columbia from just 25 to over 400. “God is planting you in a different part of the vineyard for you to produce even more for God, His Church and His kingdom,” he said.

Graham charged the congregation to produce, as well, asking, “What’s your excuse for not serving the Lord?” “Produce where you are planted!” he said. “Keep on serving, keep on producing, keep on lifting up the name of Jesus!”

Reflecting on the service afterward, Bishop Edgar said, “It was a glorious, joyful day. I kept being overwhelmed with emotion, with joy. And I was so impressed – this Diocese can throw a party! I don’t just mean the party afterwards, but really putting together a service, all the people involved, the musicians, the planners, the acolytes, everything about it felt amazingly worshipful. The kind of worship, that is gladness in the presence of God, kept wafting over me through the whole service, the whole day…. I feel like Jamie Graham offered us a hook with ‘Planted to Produce.’ Here we are. We’ve got to bear fruit. We’ve got to plant churches. We need to be seeking the lost through evangelism and sharing our faith ….But also in terms of growing in impact in the community, growing in service to the community, reaching out to and serving and caring for the weakest, the outcast and the suffering.”

The service was live-streamed and a recording of it may be found below.

Prior to his consecration, Bishop Edgar had been serving as the Planting Pastor, Rector and Dean of The Cathedral Church of the Apostles (Diocese of the Carolinas) in Columbia, SC, since 2004. He served as the Rector of St. Mark’s Episcopal Church, Glen Ellyn, IL from 1997 – 2004; as the Canon Pastor at the Cathedral Church of St. Luke in Orlando, FL from 1994 – 1997 and as the Curate at St. Paul’s Church, Chattanooga, TN from 1993 – 1994. Dean Edgar and his wife, Beth, have been married for 32 years. They have five grown children and a new granddaughter.

As diocesan bishop, Edgar will lead 53 churches (including parishes and missions) in the diocese which is affiliated with the Anglican Church in North America (ACNA). The diocese has nearly 20,000 members, 92 priests and 32 deacons in the eastern half of South Carolina.