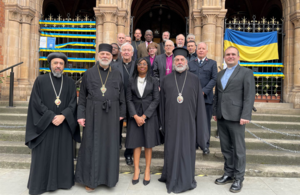 Faith Minister Kemi Badenoch and London church leaders today (9 March 2022) met at the Ukrainian Catholic Cathedral in London to demonstrate solidarity and support for the Ukrainian people and the role the Christian church can play in welcoming newly arrived Ukrainians in the UK.

The minister met leaders, including Rector of the Ukrainian Cathedral and Archbishop of Westminster, and said the government and faith leaders stand ‘shoulder to shoulder’ with the Ukrainian community, which has a ‘deep and long-standing connection’ with the UK.

The UK and Ukraine have a deep, long-standing connection, with the first Ukrainians arriving in Manchester over a century ago. Today, in 2022, tens of thousands of people born in Ukraine now call the UK home – and I hope they will continue to call it home long into the future.

Since the conflict began, people in this country have been in awe of the determination and courage Ukrainians have shown.

It has sparked a wave of support across the UK with people up and down the country making donations to help the humanitarian effort and attending vigils to show solidarity.

As ever, the church and other faith communities have been at the heart of these humanitarian efforts, and I stand together with faith leaders in calling for peace and offering our full support.

Those who attended the meeting included:

Church leaders of all denominations across London have been horrified by the ongoing humanitarian crisis in Ukraine as it continues to unfold. Today, we stand together in praying for peace.

As millions of Ukrainians are being forced from their homes, families torn apart by a senseless conflict, we, as Christians and as a community, must do all we can to support those fleeing from war and those who remain in Ukraine.

Church leaders have gathered at the Ukrainian Cathedral in central London to stand with Ukraine and its God-loving people as they suffer the atrocities of war and crimes against humanity.

Today, leaders of all denominations across London unite to pray for peace and to work together to ensure the safety and welfare of those fleeing, so that those displaced may find solace and peace of soul in their traditional churches.

DLUHC is launching a new sponsorship scheme to make sure Ukrainians forced to flee their homes due to this terrible conflict have a route to safety.

The scheme will match charities, businesses and individuals to those who do not have family ties to the UK, allowing them to come here for an initial 12 months, with the ability to work and access public services.

This is alongside the extended family route and changes to visas for people already in the UK which we have been brought in following extensive engagement with Ukrainian partners on what support is needed now, which will allow tens of thousands of people to be reunited with their families and stay here safely.