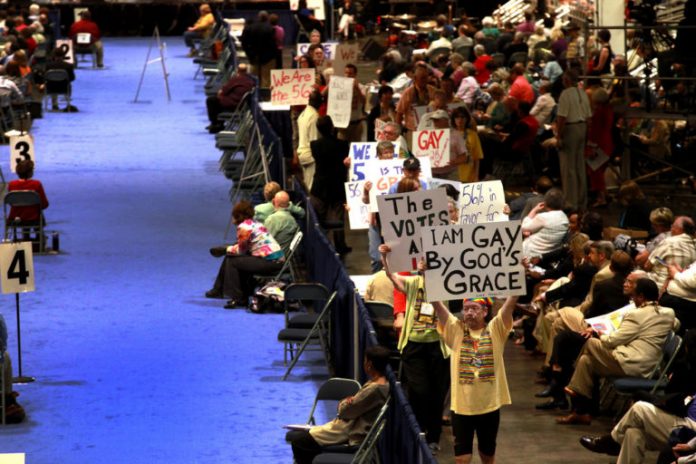 The timeline for a full communion partnership between The Episcopal Church and the United Methodist Church remains on hold as the latter has postponed its quadrennial General Conference until 2024, when it will consider a vote to split the 12.9 million-member denomination over disagreements on the full inclusion of LGBTQ+ members.

That vote was to take place in 2020, but due to the COVID-19 pandemic it was postponed first to 2021 and then to 2022. It’s now been rescheduled a third time due to ongoing virus concerns and visa delays for its members traveling from some 130 countries outside the United States.

In the meantime, the General Convention Committee on Ecumenical and Interreligious Relations recently discussed Resolution A093, which commends the ongoing work of The Episcopal Church-United Methodist Dialogue and its proposal for full communion.

During the legislative hearing, the Rev. Rowan Larson, curate for formation and mission at Grace Church in Newton, Massachusetts, asked committee members to recommend that The Episcopal Church not move forward with any proposal until the United Methodist Church addresses its current ban on LGBTQ+ clergy and the marriage of same-sex couples.

As it stands, the full communion proposal, “A Gift to the World: Co-Laborers for the Healing of Brokenness,” does not address LGBTQ+ full inclusion; rather, it “is an effort to bring our churches into closer partnership in the mission and witness to the love of God and thus labor together for the healing of divisions among Christians and for the well-being of all.”

When the UMC finalizes its separation plan, any plan for full communion will be with those who are LGBTQ+-affirming, the Rev. Margaret Rose, deputy for ecumenical and interreligious relations for The Episcopal Church, told Episcopal News Service. A093, Rose said, would be an assurance to them “that we want to continue in the struggle for justice with you.”

The Episcopal Church currently has six existing full communion partnership agreements: the Evangelical Lutheran Church in America; the Moravian Church (Northern and Southern Provinces); the Mar Thoma Syrian Church of Malabar, India; the Old Catholic Churches of the Union of Utrecht; the Philippine Independent Church; and the Church of Sweden.