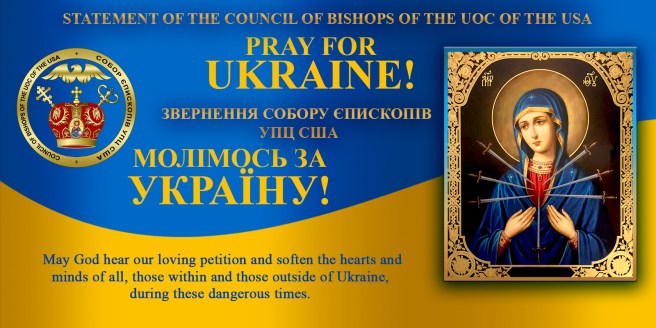 U.S. church pronouncements about international affairs often are detached, anodyne, and sometimes surreal. Russia’s attack on Ukraine is no exception. Read this piece from Sojourners. And here is the National Council of Churches. This vacuous statement came from the Anabaptists and Mainline Protestants.

Interestingly and helpfully, the National Council of Churches website included this link to a considerably more vigorous statement from the Ukrainian Orthodox Church of the USA. Here are some meaty excerpts:

The scare and intimidation tactics with the presence of the armed vehicles and over a hundred thousand of soldiers around the borders of Ukraine combined with systematic cyber-attacks at all levels of life in Ukraine can only be interpreted as terroristic threats that target innocent lives of Ukrainian citizens.  They seem to be instigated by an extremely low sense of self-esteem among the leadership of what has become the aggressor nation of modern times – which creates a very dangerous set of circumstances.

Ukraine – the geographic reality – with its own sovereign borders has always been coveted by neighbors from anywhere beyond those borders because of the expanse of her natural resources… It was and is this land that so many other countries have attempted to annex, dominate, subordinate and benefit from not only in modern history, but throughout the early Kyivan-Rus’ history.

It is no secret that Russia, under the guise of the “Soviet Union” wanted not only the rich natural resources, but just as importantly, a buffer zone between itself and the rest of the Western world. Further, Ukraine, as a blossoming democracy inspires surrounding nations. Therein lies the key to comprehending modern Russian and other earlier invasions. In seeking to control the land, the resources and the political system, hardly a thought has ever been given to the real people who live in that land. These people are the “nation” of Ukraine, and that nation possesses a self-identity that is impossible to annihilate.

Through centuries of invasions the “nation” was unimportant to the invaders. Thus, the “nation” bore the loss of millions and millions of victims to genocide, most atrociously under the former Soviet Union and its Holodomor. Throughout all this history of terror, the self-identity of the “nation” survived – in the hearts, minds and souls of the people. It is with the people that we are desperately concerned as we write these words. It is for the them, our brothers and sisters, that we ask you to join is in prayer.

And finally, the prayer, all in caps:

OUR BROTHERS AND SISTERS, LORD, ARE ONCE AGAIN THREATENED BY AGGRESSORS WHO SEE THEM ONLY AS OBSTACLES BLOCKING THE PATH TO THE COMPLETE DOMINATION OF THE PRECIOUS LAND AND RESOURCES OF THE COUNTRY OF UKRAINE.  STRENGTHEN THE PEOPLE AS THEY FACE THIS GREAT DANGER, TURNING TO YOU IN THE IMMEASURABLY DEEP FAITH, TRUST AND LOVE THEY HAVE PLACED IN YOU ALL THEIR LIVES. SEND YOUR HEAVENLY LEGIONS, O LORD, COMMANDED BY THE PATRON OF KYIV, ARCHANGEL MICHAEL, TO CRUSH THE DESIRES OF THE AGGRESSOR WHOSE DESIRE IS TO ERADICATE OUR PEOPLE.

You know a prayer is serious when heavenly legions and the Archangel Michael are summoned.

The Ukrainian Church in the USA obviously is praying for their brethren in the homeland, and so their supplications are more explicit and fervent. They recall the history of Russian aggression against and exploitation of Ukraine. They pray for the survival of Ukraine and crushing the “desires of the aggressor whose desire is to eradicate our people.”

In contrast, the National Council of Churches urges “diplomatic tactics instead of warfare,” commends “export control focused on Russian industries,” applauds “reassurance that the Ukraine will not be joining NATO in the near term,” and calls on “formal agreement prohibiting nuclear weapon placement by either NATO or Russia.”

The Geneva-based The World Council of Churches, in its Ukraine statement, cited the “mad progression towards war” and prayed for “de-escalation, and for dialogue instead of threats,” noting that “God’s people – and members of the ecumenical fellowship – find themselves on both sides of the current confrontation,” obviously referring to the Russian Orthodox Church, which is a prominent member of the WCC. Perhaps no statement at all would have been preferable.

A church statement on evil actions is fairly useless if it can’t name the evil actions and must instead adopt a neutral stance. Of course, sanctimonious saber-rattling prayers are also unhelpful, but the Ukrainian Church opened its prayer with:

WE YOUR SINFUL CHILDREN TURN TO YOU WITH HUMILITY IN OUR HEARTS AND BOW OUR HEADS LOW BEFORE YOU. WE BESEECH YOUR LOVING KINDNESS AND ABUNDANT BLESSINGS UPON THE NATION – THE PEOPLE – OF UKRAINE DURING THESE DAYS OF GREAT DANGER TO THEIR SAFETY AND WELL-BEING.

This prayer’s core message was: yes we are sinners, and we need YOUR help, Lord, as our nation faces potential conquest and destruction. We all can pray for the Lord to answer this prayer with His angels. And may the Lord also deliver us from and forgive us all for vacuous pontifications and prayers.