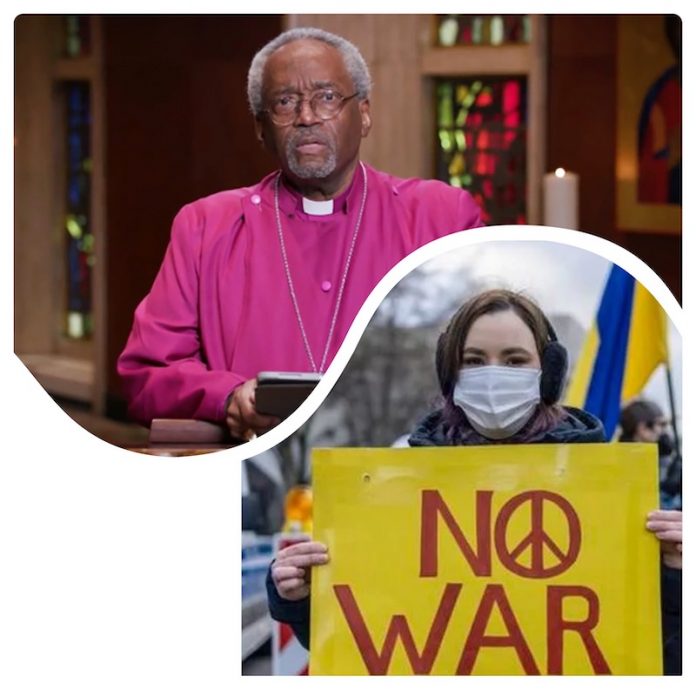 Episcopalians and Quakers have offered statements of solidarity and sympathy for Ukrainians, in which pacifist and humanist declarations were at times painfully at odds with the reality of an impending Russian invasion unfolding later the same day.

“We pray that our leaders will find a diplomatic way, a non-violent resolution,” Episcopal Church Presiding Bishop Michael Curry opened at the Wednesday, February 24 online prayer vigil convened by the Episcopal Church and the Friends Committee on National Legislation (FCNL). “But we don’t know how to pray as we ought, and so the spirit must intercede for us at this time.”

Organizers characterized the vigil as a time “to lament the human harm caused by violence and conflict.”

“We condemn the invasion of Ukraine and pray in solidarity with all children of God who are now in harm’s way,” Curry stated.

“Earthly peace is built upon the recognition of the unity and goodness of all created existence, the oneness of humanity, and the dignity of every person,” affirmed ELCA Director of Witness and Society Amy Reumann. She was joined by FCNL’s Dr. Bridget White, who looked to mankind’s efforts.

“We seek an earth restored,” White proposed. “That vision of a world free of wars can seem very distant, but Quakers and all people of all faiths have not worked tirelessly over the ages for peace because it is easily grasped. We do it because we are called to that work.”

Such work, White stated, is rooted in “a commitment and a persistence that peace is still possible.”

“We can pull the world back from this break yet,” White insisted hours before Russian military forces entered Ukraine. “We urge all those involved in this conflict to do everything they can to immediately end the hostilities, return to the negotiating table and protect all human life.”

White stated that those assembled together were there to share courage and hope with one another, “which are not visions or ideals, but our actions, ways of living, that we undertake each day and that can bring about the world that we seek. You are all here because you believe that a different world is possible: a world where the Divine Spirit in each of us is recognized, honored and loved.”

How Christians might respond to aggressors was left largely unaddressed. The interfaith pacifist statements contrasted with fervent prayers from the Ukranian Orthodox Church the same day in which that church’s council of bishops implored, “Send your heavenly legions, O Lord, commanded by the patron of Kyiv, Archangel Michael, to crush the desires of the aggressor whose desire is to eradicate our people.”

Sojourners President Adam Russell Taylor insisted that the prophet Isaiah’s vision of nations beating swords into plowshares may seem utopian, but that presumption of peace was both a practical and moral imperative.

“While the forces of imperialism may seem inescapable, we know that our faith tells us a different story. As religious leaders we must say out loud: no to military action as a solution to problems and rather yes to the ongoing promotion of dialogue of solidarity of cooperation,” intoned Taylor. “We must and can tap into a prophetic imagination to see a path toward peace rather than accept war as a foregone conclusion.”

Johnny Zokovitch, Executive Director of Roman Catholic peace organization Pax Christi USA, appealed to the conscience of political leaders in Russia, Ukraine, the U.S. and EU “to make every effort on behalf of peace, and we pray today that dialogue may prevail, that a just peace might be reached, and the common good be placed ahead of the craving of power.”

“We are to be a disturbing peace in the world, not taking up arms,” instructed ELCA Presiding Bishop Eaton. “May our security come, not from weapons, but from respect. May our strength come, not from violence, but from love,” Eaton prayed. “Unarmed and confident, help us to defend the dignity of all creation.”