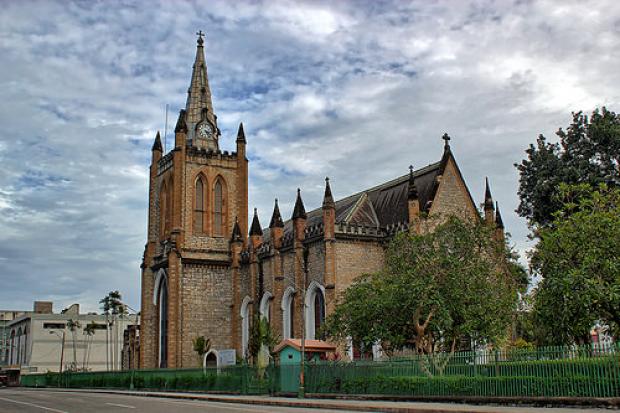 The Diocese of Trinidad and Tobago closed Holy Trinity Cathedral in Port of Spain to further worship after a piece of the rafters was found on the floor of the nave on Thursday morning.

An inspection revealed that termite damage had caused portions of the roof to cave in, prompting engineers to recommend the building be closed as being structurally unsafe. Last November the cathedral launched an US$11 million capital campaign to restore the church, which was badly damaged by earthquakes and floods in 2018.

Construction began in 1818 and the cathedral was consecrated in 1823. Holy Trinity Cathedral is one of the oldest structures in Trinidad and has been in continuous use since its foundation.  On 21 August 2018 a 6.9 magnitude earthquake rocked the southern Caribbean, damaging many buildings in Trinidad.  A hurricane then struck the island on 20 Oct 2018, leading to three days of intensive rain and widespread flooding.

The two natural disasters caused extensive damage to the building.  The dean of the cathedral, the Very Rev. Shelley-Ann Tenia, reported that earthquakes in 1825, 1918, and in 2018 caused substantial cracking and damage to walls, the steeple, and chancel roof, as well as the destruction of several stone pinnacles.

A survey found the roof and ceiling; interior walls; exterior walls; stained glass windows; flooring; bells; organs and various electrical, mechanical and plumbing fixtures, need to be replaced and repaired. The dean noted there was moisture trapped within the walls and structural timbers which had resulted in rotting and significant damage.

The Rt Rev Claude Berkely, Bishop of Trinidad and Tobago, at the fundraiser kick off said:: “Seventy million dollars ($11 million US) is a huge sum in this guava season, yet there are factors that encourage us that it will be achieved in God’s name. I call on brothers, sisters and friends to seriously consider this effort to restore the cathedral church.”

The cathedral congregation met in the cathedral garden this Sunday. “We are in active consultation with other Christian denominations to secure a sacred space for worship as a community,” the dean said.