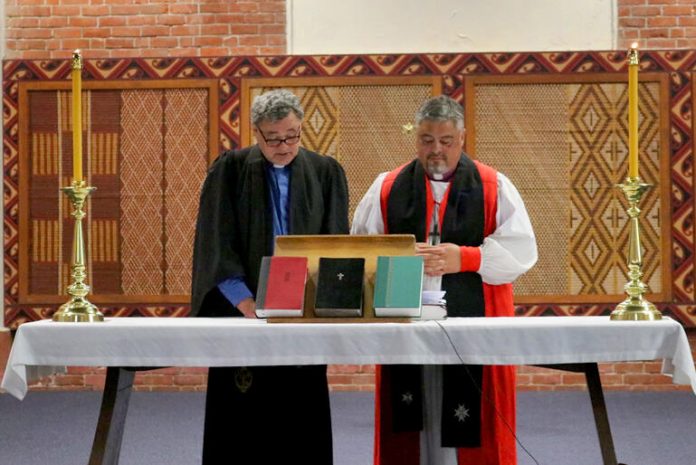 The new Paipera Tapu-Bible, published by Bible Society NZ, is the first diglot edition since Te Pīhopatanga o Aotearoa published a diglot Bible in 1992 (prepared by Cleve Barlow), which placed the 1952 Paipera Tapu translation in parallel with the English King James Version.

The 2022 diglot edition brings together the 2012 Paipera Tapu text (which added introductions, headings, paragraph formatting, maps and macrons to the 1952 translation) and places it alongside the New Standard Revised Version (NRSV) English text.

“I have no doubt that this new diglot version will be a treasured edition of this taonga, this Paipera Tapu.” he said.

“These words continue to be alive for us. They continue to be a part of the fabric of our very lives.” he said to the ecumenical gathering of theology students in Gisborne with Rev Dr Te Kaawa for an Otago University Māori Christian theology block course.

“If I think of every tangihanga on marae. I think of every time the words of scripture have been used in these spaces, as karakia, as kauwhau – even as whaikorero from those who might claim not to be Christian – that’s how beautifully permeated our culture has become in the living word of scripture.”

Archbishop Don has heard that John 3:16 is the world’s most quoted line of scripture, but he says for Māori, it’s got to be Matthew 6:9-13 – the Lord’s Prayer.

“Māori have sung that prayer so often, over so many years, that I think we hardly remember it’s scripture anymore.”

Still, for Archbishop Don this latest diglot version has real value for Māori Christians looking to deepen their own understanding of te reo, and for those undertaking serious academic study.

While the 1952 Paipera Tapu looked at older English translations, it also relied on translators such as Bishop Wiremu Pānapa, a noted expert in New Testament Greek, and Rev Te Hihi (Dan) Kaa, who was a biblical Hebrew scholar, alongside formidable experts in Te Reo Māori such as their Chair, Sir Apirana Ngata. Their work continued the deep academic tradition of Māori clerics – such as those who studied at Te Rau Theological College in the late 1800s and early 1900s – that expertly weaved the study of Hebrew, Greek and Latin with matauranga Māori.

That means today’s new diglot edition works well for academic study, placing side by side the closest English parallel to the biblical languages (in the NRSV) alongside a Māori version that in many places also relates directly to the original texts.

Archbishop Don gave thanks for the 1952 translation team and for all who contributed revisions, recalling how Archbishop Brown Turei had blessed the updated Paipera Tapu that featured Archbishop Don’s own artwork on its cover, back in 2013.

Archbishop Don reminded those gathered of the love and mahi that so many had poured into the translations,

“It is a joy to mark this new edition, to weave together the memories of those past and those that are here, and to acknowledge the wonderful servants who have given many faithful hours over time to ensuring that this word is still available to us today.”

Bible Society NZ’s Translations Director Stephen Pattemore championed the need for te reo Māori experts to support the next edition of Te Paipera Tapu that is planned as a resource to nourish faith and biblical literacy for the kura kaupapa generations.

“We believe this long-awaited edition will be popular with both te reo speakers and those learning the language.”

The newly published diglot Paipera Tapu – Bible features the English NRSV text and footnotes on the left page of each fold and places the reformatted Māori language texts on the right.

The 2022 edition Diglot Bibles come in three different volumes: bound in black leather with a tukutuku lattice-pattern cross on the front, a red cover featuring a mirrored koru pattern (that represents the two languages and their relationship with each other) and the same cover design in dark green.

2022 Diglot Bibles are available now through Manna Christian Stores via the links for each volume below: