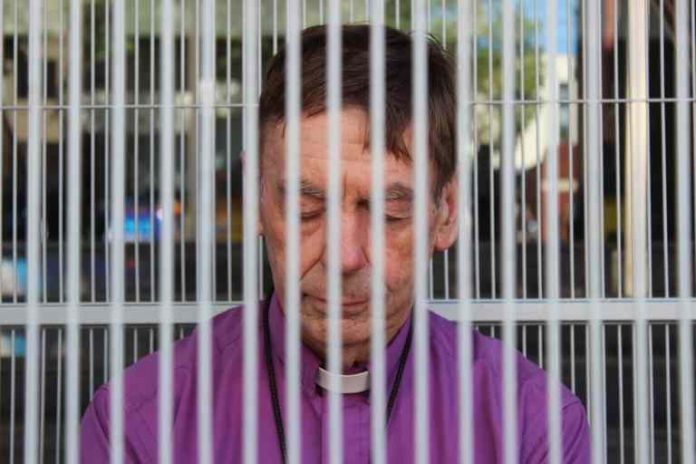 Two Melbourne bishops have locked themselves in a cage to protest inhumane detention of refugees and asylum seekers in Australia.

Bishop Paul Barker and Bishop Philip Huggins each spent eight minutes locked inside a cage outside the Park Hotel in Carlton, where dozens of detainees have been held for up to eight years.

About 30 men are being held in the Park Hotel, while several hundred people who are asylum seekers or refugees remain in Nauru or Papua New Guinea.

Bishop Huggins said he planned to spend his eight minutes in the cage meditating “Jesus have mercy”.

He said the display’s purpose was twofold. One, it took place in view of some of the people detained at the hotel, giving them encouragement and comfort.

“It’s a matter of compassion, compassion is doing to others what you would hope people would do to you, and not doing anything under any circumstance you wouldn’t want anybody to do to you,” Bishop Huggins said.

“As a parent, I particularly feel for their parents, and their grandparents, who have loved them and wondered about them for 8 years.”

Bishops Barker and Huggins are the latest in a series of public figures invited to participate in The Freedom Cage campaign, including former soccer player Craig Foster. The group aims to stand in solidarity with refugees and asylum seekers, detained both in Australia and offshore.

It is also seeking the abolition of the direction which prevents refugees who arrived by boat being granted family visas.

Bishop Barker said Djokovic’s deportation highlighted that people had been detained in the same hotel he was for as long as eight years.

He said he and Bishop Huggins hoped to raise the public profile of the issue.

“To [detain them] for eight years is an abuse of human rights and dignity,” Bishop Barker said.

“We’re wanting to raise that issue, and thus put pressure on governments to deal with this in more humane and expedite some of these issues better.

“We believe that Christians should be at the forefront of compassion to refugees, it’s a big theme in Old Testament law. We want to add our voice to others.”