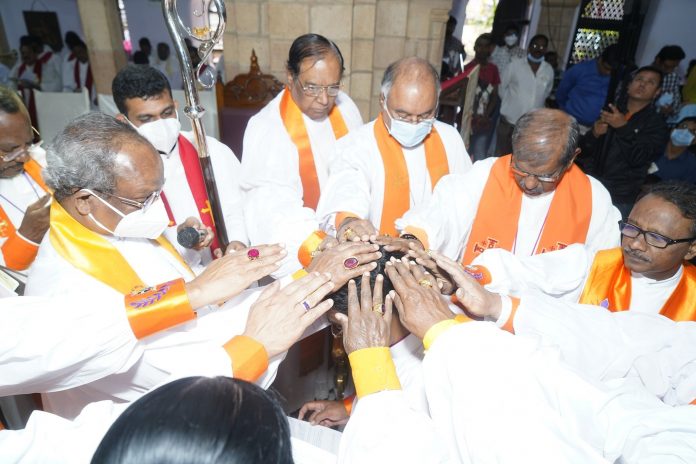 CSI Moderator Dharmaraj Rasalam has called a meeting of the Bishops’ Council on February 9, 2022 in Chennai. In the notice issued yesterday Feb 2, he has urged his fellow bishops to “please treat this as important” and attend the meeting “without fail.”

As usual the highly secretive Bishops’ Council, which became part of the CSI Constitution with amendments made in 1999, meets behind closed doors with no agenda given in the notice. Even the General Secretary and Treasurer of the Synod attend only if invited. This mafia-style body of 24 in a church of 4.5 million is where all the planning and scheming takes place to assert and perpetuate the supremacy and hegemony of the episcopacy over the presbyterian and congregational elements of the church. The main purpose of the meeting would almost certainly be to build consensus among bishops on the highly controversial amendments to the CSI Constitution being pushed by the Officers of the Synod. The bishops remain divided on a number of them including on raising the retirement age of presbyters and bishops from 67 to 70. Two recent Synod Executive Committee meetings held in December and January to discuss the proposed amendments wound up a day earlier than scheduled with little detailed discussion due to sharp differences among bishops themselves.

It would be disastrous, from the Moderator’s point of view, to call a special meeting of the 350 plus member-strong Synod to approve the proposed amendments, without attempting some consensus building among bishops. Should that succeed on Feb 9, the meeting will likely set a date for the special Synod session which could happen in March or April. The other issue that will almost surely figure is the appeal filed by the CSITA against the division bench order of the Madras High Court on the Serious Fraud Investigation Office (SFIO) probe of the CSITA ordered by the Central Government. As we reported on the very day the order was delivered i.e. Dec 14, 2021, the court while dismissing the writ appeal filed by the CSITA against the SFIO probe gave it eight weeks of “interim protection” giving it a breather to file an appeal in the Supreme Court.

The CSITA has met that deadline by having its appeal registered at the Supreme Court registry yesterday Feb 2. What is interesting to note in the SC listing is that a caveat has already been filed in this matter by one advocate Sriram P. This appears to be the same Delhi-based advocate used by Thyagaraja, who has signed several illegal lease agreements on CSITA properties, when he moved the National Company Law Appellate Tribunal (NCLAT) in New Delhi against the order of the Chennai bench of the National Company Law Tribunal (NCLT). This order had dismissed the bid by the late John Dorai to have his band on merrymen, which includes Thyagaraja as a director, recognised as the genuine CSITA. Should it be true that Sriram P is indeed representing Thyagaraja, then the SC is unlikely at the first hearing to grant any CSITA plea for an interim stay on the Madras division bench order without first settling the issue of whether Thyagaraja — who was not a petitioner in the Madras High Court and hence would be objected to by the CSITA lawyers — has the locus standi to be a party to the appeal. Thyagaraja will try to convince the SC he has locus standi since his appeal against the NCLT order on the authentic CSITA matter is now pending in the newly-formed NCLAT Chennai bench where it was transferred to from Delhi. Meanwhile with the two month status quo order of the Madras High Court expiring on February 14, nothing stops the government from setting the ball rolling on initiating a fresh SFIO probe following the process outlined in the single judge bench order of the Madras High Court and upheld by the division bench. “The CSITA which has engaged in forum shopping runs a very high risk in the Supreme Court” says one senior Chennai lawyer who has been closely following the case. There is no guarantee that when the interim stay issue comes up after the Thyagaraja locus standi issue is addressed the SC would want to interfere with the division bench order of the Madras High Court which itself has upheld the single judge order.

What would be interesting to see is if Dr David Chellaraj or Mr E. Premkumar, CSI members who were complainants against the CSITA with the Registrar of Companies, implead themselves in the appeal filed by the CSITA in the SC. They are the only two non-government names listed as respondents in the writ appeal order of December 14, 2021 and hence have no locus standi problems to overcome.

The Bishops’ Council would also do well to reflect on growing popular unrest in several dioceses against the increasingly authoritarian actions of bishops. The Moderator himself has come under fire this week for his plan to convert Thiruvananthapuram’s hallowed erstwhile congregational stronghold Mateer Memorial Church into a Cathedral. In Malabar diocese ordinary members have been staging protests against Bishop Royce Manoj Victor’s authoritarian ways which includes his not having convened the diocesan executive for nearly a year now. In Bengaluru meanwhile there is growing disquiet over the increasingly authoritarian style of bishop P.K. Samuel including certain highly controversial appointments made after the new diocesan council in October 2021.