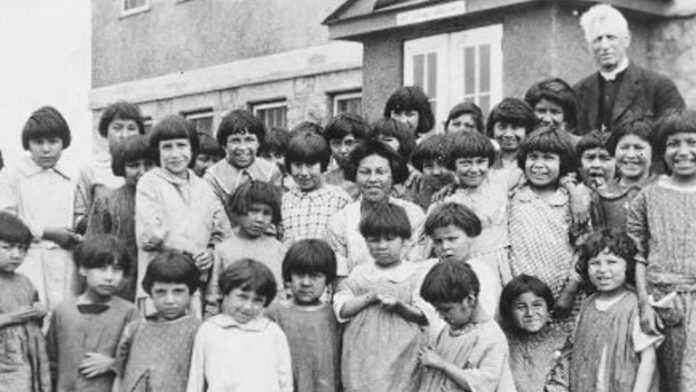 AFTER SEVEN MONTHS of recrimination and denunciation, where are the remains of the children buried at the Kamloops Indian Residential School?

The Canadian Press has just honoured the children of residential schools as the “Person of the Year 2021.” The huge media story last summer grew out of the scanning of part of the site in the British Columbia interior where the school operated from 1890 to 1978. The “discovery” was first reported last May 27 by Tk’emlúps te secwépemc First Nation Chief Rosanne Casimir after an anthropologist, Sarah Beaulieu, used ground-penetrating radar in a search for the remains of children alleged by some to be buried there. She is a young anthropologist, an instructor in Anthropology and Sociology at the University of the Fraser Valley since 2018. Her preliminary report is actually based on depressions and abnormalities in the soil of an apple orchard near the school – not on exhumed remains. According to Chief Casimir, these “missing children” represent “undocumented deaths.” Their presence, she says, has long been “knowledge” in the community and “some were as young as three years old.”[1]

From new research revealed at a July 15 press conference last year, the anthropologist scaled back the potential discovery from 215 to 200 “probable burials.” Having “barely scratched the surface,” she found many “disturbances in the ground such as tree roots, metal and stones.” The “disruptions picked up in the radar,” she says, led her to conclude that the sites “have multiple signatures that present like burials.” But she cannot confirm that until the site is excavated – if it is ever done. A community spokesperson says the full report “cannot” be released to the media.[2] For Chief Casimir, “it is not yet clear whether the continuing work on the Kamloops site will involve excavation.”

The Kamloops “discovery” of 2021 created a major sensation in Canada and abroad. Based on the preliminary assessment and before any remains were found or any credible report made, Prime Minister Justin Trudeau immediately referred to “a dark and shameful chapter” in Canadian history.[3] British Columbia Premier John Horgan said he was “horrified and heartbroken” to learn of a burial site with 215 children that highlights the violence and consequences of the residential school system.[4] Several other Aboriginal communities and media outlets then followed up with references to unmarked graves.

On May 30, the federal government lowered the flags on all its buildings to half-staff. Later, it instituted a new holiday to honour “missing” children and survivors of residential schools. Spontaneously, clusters of shoes and orange shirts and other paraphernalia were placed on church steps in many cities or on the steps of legislatures in memory of the little victims. Around the country, churches were burned or vandalized. Statues were spray-painted and pulled down in apparent retaliation for the fate of the children. The statue of Queen Victoria in front of the Manitoba Legislature was defaced and pulled down. Montreal’s statue of Sir John A. Macdonald, Canada’s first prime minister, was knocked down, his detached bronze head symbolically rolling on the ground.

In the wake of unsubstantiated claims by Aboriginal leaders, several media outlets amplified and hyped the story by alleging that the bodies of 215 children had been found, adding that “thousands” of children had “gone missing” from residential schools and that parents had not been informed. The undisturbed sites even became “mass graves” where bodies were dumped in a jumble.

This supposed “news” made the rounds in all sorts of media, tarnishing Canada’s self-image and reputation abroad. Under the title “Horrible History: Mass Grave of Indigenous Children Reported in Canada,” the May 28 New York Times, even when updated on Oct. 5, reported that “For decades, most [sic] Indigenous children in Canada were taken from their families and forced into boarding schools. A large number [sic] never returned home, their families given only vague explanations, or none at all.” The indigenous community “has found evidence of what happened to some of its missing children: a mass grave containing the remains of 215 children on the grounds of a former residential school.”[5]

THESE FALSE REPORTS induced the Office of the United Nations High Commissioner for Human Rights to portray the situation as “a large scale human rights violation.” The UN urged Canadian authorities and the Catholic Church to conduct “thorough investigations into the discovery of a mass grave containing the remains of over 200 children” — again before a single verified body had been exhumed.[6] Amnesty International is demanding that the persons and institutions responsible for the “remains” that had been “found” in Kamloops be prosecuted.[7]

Read it all in the Dorchester Review