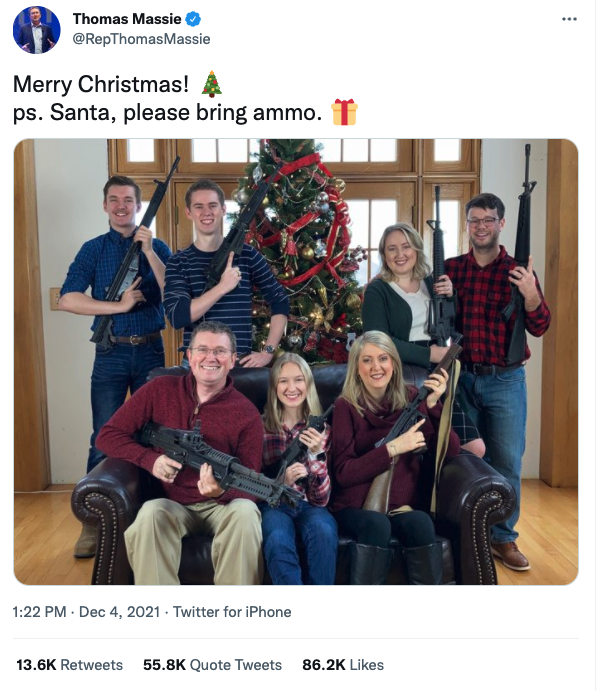 The Archbishop of Canterbury has waded into the swamps of American gun control politics, denouncing a Kentucky Congressman for tweeting a Christmas portrait of his family all bearing arms. The 4 December 2021 post by Rep Thomas Massie, R. KY4 was unconscionable, the Most Rev. Justin Welby tweeted, saying firearms in Christmas cards were contrary to the spirit and message of Christ.

Rep. Massie, a long standing supporter of the Second Amendment right to bear arms, and staunch foe of restrictive gun control laws, posted a cheerful photo of his family, in which all were smiling and wielding a weapon. “Merry Christmas! ps. Santa, please bring ammo,” the Republican lawmaker wrote.

The tweet spawned a sharp response from gun control advocates. The mainstream media in the US responded to Rep. Massie’s provocation with articles entitled: “U.S. congressman posts family Christmas picture with guns, days after school shooting,” from Reuters and “House Republican posts photo of his family holding guns days after Michigan school shooting,” from  NBC News.  CNN opined this photo was proof to their satisfaction of the malign character of Republicans in an opinion article entitled: “What Rep. Massie’s Christmas photo says about today’s GOP.”

The Archbishop of Canterbury entered the fray two days later, tweeting on 6 December 2021 his displeasure. He wrote that “many of us were sickened to see a Christmas photo of a family posing with guns. The message of the angels at Christmas is peace on earth and goodwill to all people. It has nothing to do with the US gun rights debate.”

The archbishop returned to the Kentucky congressman’s provocative tweet with two further responses, asking: “Let us turn away from the glorification of violence and instead welcome the God who comes to us in peace as the Christ-child.” The archbishop then offered Pope Francis as his preferred model of a “truly Christ-like image”, rather than the Massie family.

Rep. Massie was unperturbed by the criticism, responding to one comment that his remarks were well below the bar of good taste by saying he kept is BAR under the couch. (A BAR is a semi-automatic rifle produced by the Browning Arms Company.)

In gun control debates in Congress, Rep Massie has taken a stance as a leader of gun rights. The reasons behind his defense of the right to own firearms is not to glorify firearms, nor ignore gun violence, but to glorify the right to bear arms under the constitution. The issue at heart for the Kentucky congressman is that the Constitution is at the forefront of the American system of government, whereby the state does not govern the people, but the people govern themselves.