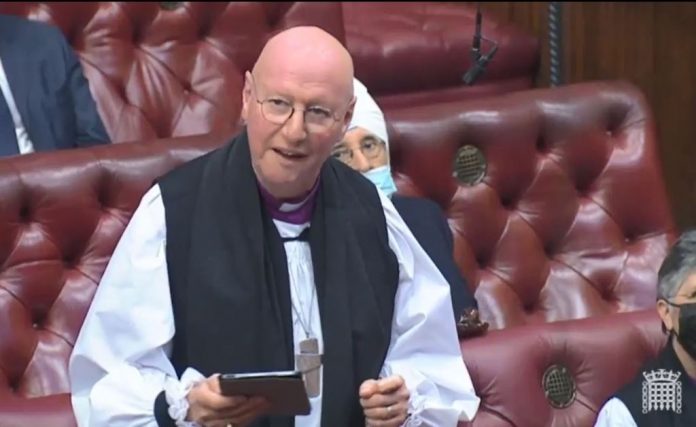 The Lord Bishop of Liverpool: My Lords, I am grateful for the opportunity to address your Lordships for the first time and on this subject, and for the privilege of following the noble Lord, Lord Bilimoria. I am grateful to the noble Lord, Lord McNally, for his kind words. I thank all noble Lords for the warmth of the welcome that I have received, and, for the quality of briefing and induction from the officers and staff of your Lordships’ House, which has been exemplary and profoundly helpful.

I speak as one whose first degree was in drama and theatre arts, and who was almost employed by the BBC as a trainee script editor in what was then called “English Regions Drama”, at the Pebble Mill studios in Birmingham, in 1975. With whatever wisdom, I chose instead to enter the ordained ministry of the Church, and there have been times when I have felt that I chose the lower calling. Forty-two years of ministry in six different dioceses have culminated in the enormous privilege of my being appointed Bishop of Liverpool in 2014. I have been preferred to your Lordships’ House late in my ministry, but I am very grateful to be here and to receive wisdom for at least a few months.

Among its many dimensions, I want to speak of what the BBC does uniquely in our fragmented public square. To me, the gift and value of public service broadcasting is a matter of form before it is a matter of content: it rests on the decision to assume a tone of voice. The value of the BBC to this nation and our global position is rooted in its decision to be calm, to choose a particular volume and quality of scrutiny and to sustain it, no matter how unpopular it may be.

I have described the public square as fragmented. Increasingly, it is one where to be opinionated is to be rewarded, and where volume and shrillness of tone have become praiseworthy in themselves. In such a world, it is surely the role of a public service communicator to still the waters so that they reflect the truth. Calm scrutiny will cause people with power, whoever and wherever they may be, whatever they may say, however loudly they may speak, one and all, to be uncomfortable. This applies as much to the Bishops of the Church of England as to anyone else.

Calm scrutiny is a gift, but it must also be proclaimed. In the Hebrew scriptures, we are told that

“Wisdom calls out in the street”.

To me, the impartiality of a public service broadcaster rests in impartiality of scrutiny and courage in scrutinising, rather than in attempting the even-handed presentation of increasingly strident points of view. In Liverpool, the work of my distinguished predecessors, Lord Sheppard of Liverpool, and Bishop James Jones KBE, rested on this commending of quiet scrutiny in the face of riot after poverty or institutional defensiveness after tragedy, for example, or any other falling away from coherence, community and the common good.

Your Lordships will know of the recent terrorist incident in Liverpool. It faced us with a mystery. To this day, we do not know why that young man did what he did, and we may never know. In the face of that mystery, the response of the English media was diverse. For some, the journey of the young man concerned provided a fine opportunity for the naivety of people of faith to be exposed, or for the systems by which people seek refuge to be deplored. These words had little purchase in Liverpool, where a number of organs of commercial media have been deeply and permanently distrusted for 40 years.

The BBC, on the other hand, nationally and regionally, genuinely provided the impartial platform of scrutiny which I have described, and it continues to hold the significant trust of people across my community, where few other voices do. In this case, that trust rested on a readiness, particularly on the part of local BBC journalists, to explore on its own terms the self-understanding of communities of faith as places of God’s welcome. In other words, it rested on a platform of religious literacy.

The BBC is not perfect, but it should be treasured and supported. Having said and meant all these nice things about it, I also underline the urgent need for that religious literacy to be intentionally sustained and intentionally deepened, if the BBC is indeed to hold its value for a global audience in a world that remains, predominantly, a world of faith.