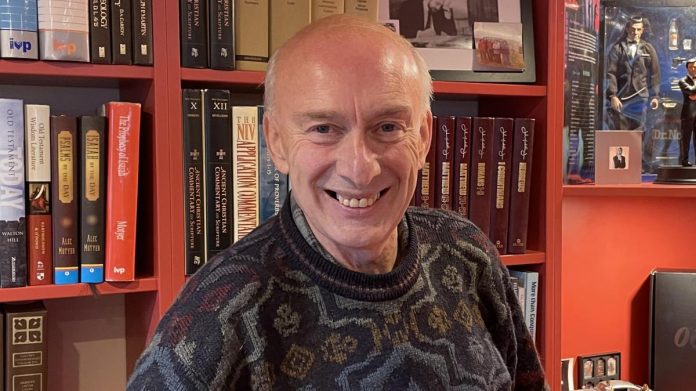 Raised the son of a Nottingham miner, the Rev Melvin Tinker had two lessons instilled in him from an early age: always tell the truth and never go down the mines.

Tinker did not go down the mines, but he brought the miner’s grit and determination to bear on a lifetime of challenging the church establishment.

The boy who had not read a book till the age of 13 went on to publish nearly 20, and grew one of the largest churches in the north of England.

When Rowan Williams was enthroned as Archbishop of Canterbury in 2003, conservative ministers sent a delegation to challenge him over previous controversial statements. Tinker was in that group. He recalled that having given the impression to their churches that they would be firm and robust with the archbishop, the other ministers were “obsequious and deferential”. Tinker felt their background did not equip them for speaking truth to power. “I told the archbishop that in the past evangelicals would not simply toe the line when vital issues are at stake — we would do what is right regardless of cost. He seemed to understand and respect that.” Tinker reflected, “No doubt the mining background came in — we prefer plain speaking.”

Born to Arnold and Doreen Tinker in Mansfield, Nottinghamshire, in 1955, Melvin Tinker was brought up in a miner’s terrace and attended one of England’s first comprehensive schools, Ashfield, where he became aware of “people who owned cars and had electricity in their homes”. Inspired by teachers, he discovered a love of reading. A family where the father was a Methodist lay preacher befriended him and explained the Christian message. Before leaving school, “I trusted in God because I was overwhelmed by the genuineness of that family’s faith”.

Tinker studied at Hull University, where he met his future wife, Heather Halls. She survives him along with their three sons, Christopher, Michael and Phillip, who are all involved in ministry.

After teaching for three years, he trained at Wycliffe Hall, Oxford, for ordination in the Church of England. Five years as chaplain to Keele University gave him a passion to explain the Christian message in ways that connected with contemporary culture. Four years as vicar of All Hallows, Cheadle, immersed him in the daily duties of a parish minister. All this prepared him for his life’s main work, growing a large church in one of the most deprived cities of England, Hull.

Tinker devoted 26 years to ministry in the English city with the lowest church attendance per capita. Under his guiding hand St John’s Newland grew into one of the largest churches in the north of England, with more than 500 regularly attending on Sundays. Tinker’s goal was a church that welcomed people from all classes and backgrounds. He felt that the established church never quite understood why so many loved and valued his down-to-earth ministry. A visiting archdeacon was bemused at the number of children at the Sunday service. “Do all these children come here every week?” he asked Tinker incredulously.

An engaging preacher who spoke with a soft northern accent, Tinker led his community out of the Church of England a year before his retirement in 2020. He believed the Anglican church had begun to promote views more at home with secular culture than the Bible, including on issues of sexuality. He was also concerned that the CoE was undermining the teaching that “Jesus is the son of God” by allowing other religious texts to be read out in church.

He explained: “The church should be a prophetic voice to challenge the culture; but the culture has come into the church and captured it.” He returned the building to the archbishop and supported his flock in building a network of churches that continue to grow. In a final challenge to the establishment, Tinker held that as the church increasingly mirrors society, faithful care of the people required leaving. St John’s Newland remains the largest church to leave the Church of England.

Tinker wrote several books, some of which predicted pressures that came to bear upon the conservative wing of the church. They filled the shelves in his office along with many other books on theology. A cabinet in the middle betrayed his one slightly guilty pleasure: it was full of 007 memorabilia, though there was not a Bond girl in sight.

Tinker had many fans in academia. Mark Dickson, principal of George Whitefield College, South Africa, wrote: “I remember his urgent appeal to ministers to stand firm and not give in to compromise.” Professor DA Carson wrote from his American college: “When Melvin Tinker comes to mind, I instinctively identify him with Valiant-for-Truth from Pilgrim’s Progress.”

Tinker reflected on his journey from a miner’s terrace to contending for truth in church and culture: “If God can use me, he can use anybody.”