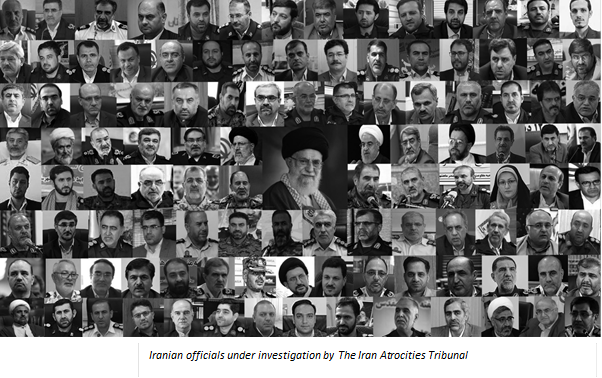 [9 November 2021, London]: The Iran Atrocities Tribunal, initiated to investigate the killing and wounding of thousands of innocent protesters in Iran in 2019, will begin a series of hearings commencing on 10th November in London to assess crimes allegedly committed by individuals in theIslamic Republic of Iran, including the Supreme Leader Ali Khamanei, and President Ebrahim Raisi, and whether they constitute crimes against humanity.

The Iran Atrocities Tribunal is an independent, international People’s Tribunal with a panel consisting of members from the UK, USA, Indonesia, South Africa and Libya bringing expertise in human rights law and international relations. The hearings will run from 10-14th November 2021 at Church House in Westminster, London. The panel will publicly hear evidence from 45 witnesses, and will investigate the role of 133 Iranian Government Officials, including the highest-ranking members of the Government, in international crimes that occurred during the civilian protests which took place in November 2019. An additional 120 witness statements will also be reviewed by the Tribunal panel before the Final Judgment is delivered to the world in early 2022.

Protests broke out in Iran on 15th November 2019 across the country after the Iranian government introduced a 200% spike in fuel prices overnight, without warning, impacting the country’s most vulnerable who depend on subsidised petrol to work and live. Government forces reportedly responded to the protests with extreme brutality and violence which led to the bloodiest crackdown of the past two decades. Reports suggest that over the course of five days, the Iranian government killed and severely injured thousands of people, including children, and detained and imprisoned many more.

The killing of protesters was deliberately hidden from the world through an ‘information blackout’, where, on the afternoon of 16th November 2019, the Iranian Government implemented a near-total shutdown of the internet which lasted for a few weeks in some parts of the country. The resulting ‘information blackout’ may have allowed the police, security and military forces to commit murder while the international community’s access to Iran was almost completely cut off.

For the first time, victims and their families, who have been denied justice for two years, will now have the opportunity to seek the truth.

One witness, who will appear at the Public Hearings with a scarf, mask and sunglasses to protect her  identity, is a mother whose son, an innocent bystander, was killed during the protests when a bullet was fired through his eye. He died on the way to the hospital, and his family were subsequently refused medical reports and denied access to his body for a whole week.

Another witness, a surgeon, who will be wearing a mask, hat and sunglasses, is expected to reveal that he saw a young man collapse to the floor after a bullet was fired and struck his head. The impact of the bullet caused the surgeon, who was standing nearby, to be covered in the young man’s blood.

Throughout the protests and the two months that followed, the surgeon delivered medical treatment, in secret, from his own home because he had seen and heard that wounded people were being taken away from the hospital every night at 1am in the cover of darkness… The surgeon continued to treat people at his home to ensure his patients could be protected.

The Tribunal is chaired by Wayne Jordash QC, a world leading lawyer specialising in international human rights. It was established at the initiation of three civil society organisations, Justice for Iran, Iran Human Rights and Together against the Death Penalty (ECPM) in response to the calls of survivors, and families of the victims.

“To date, the Islamic Republic of Iran has failed to investigate its own responsibility, or the responsibility of its own security forces, or otherwise facilitate any independent international adjudication for any of this violence or alleged crimes. The Iran Atrocities Tribunal consists of independent and impartial jurists who will investigate these events to reveal the truth and to determine where the responsibility lies in light of general principles of law and human conscience with the aim of ending impunity for any international crimes and seeking redress for the victims.”

Shadi Sadr, Co-Founder and Executive Director of Justice for Iran, commented: “This Tribunal represents the unheard voice of the whole country of Iran, where not a single person of any rank has been investigated to date. While many have turned their backs on the suffering of the Iranian people, the Tribunal will ensure these crimes are rigorously and fairly investigated. Anyone found guilty, must be held accountable.”

The Iran Atrocities Tribunal is known in Iran as the Aban Tribunal. It is chaired by Wayne Jordash QC, a world leading lawyer specialising in international human rights, who will be supported by five panel members. Co-Counsels to the Tribunal are Hamid Sabi and Regina Paulose. Hamid Sabi is a London-based lawyer with an international practice in human rights, arbitration and litigation. Mr Sabi has previously acted as Counsel and Rapporteur to the Iran Tribunal, an independent people’s tribunal that investigated mass killings of political prisoners by the Islamic Republic of Iran in the 1980s – many officials investigated by the Iran Tribunal remain in power today… He also served on the China Tribunal, and the ongoing Uyghur Tribunal. Regina Paulose is a practising attorney in the United States who focuses on international criminal law and human rights.

The Final Judgment is expected to be delivered to the world early in the New Year 2022.

The European Union was recently criticised by leading humanitarian organisations for what was widely seen as a weak response to the execution of Navid Afkari, a young wrestler who was imprisoned and tortured following his role in a peaceful protest in 2018. In 2020, Afkar was executed. In response, the EU merely described how it would “continue to engage with Iranian authorities” on matters of human rights.

This reflects a wider tendency for the world’s powers to avoid critical engagement with the Iranian authorities on human rights; invariably casting a blind eye towards Iran’s human rights abuse of its own people, and leaving its murderous actions unchecked.

Justice for Iran is a London based human rights organisation established to ‘address and eradicate the practice of human rights abuses and impunity that empowers officials of the Islamic Republic of Iran to perpetrate widespread human rights violations against Iranian citizens, and to hold them accountable for their actions and to seek redress’. Violations include, but are not limited to, crimes against humanity, torture, war crimes, enforced disappearances and genocide. Shadi Sadr, an Iranian human rights lawyer who has previously served on the panel of the 2015 International People’s Tribunal on 1965 crimes against humanity in Indonesia, and the 2017 People’s Tribunal on Myanmar, is Executive Director and Co-Founder of Justice for Iran.

Iran Human Rights (IHRNGO) is a non-profit, non-partisan, and politically independent human rights organization with its base in Oslo, Norway. IHRNGO works to abolish the death penalty, support human rights defenders, and prompt the rule of law.

Since 2000, Together against the Death Penalty (ECPM) has been fighting against capital punishment around the world by uniting and mobilizing abolitionist forces, advocating at the national and international level, strengthening the capacities of local actors and raising awareness. ECPM organises the world Congress against the death penalty every 3 ye