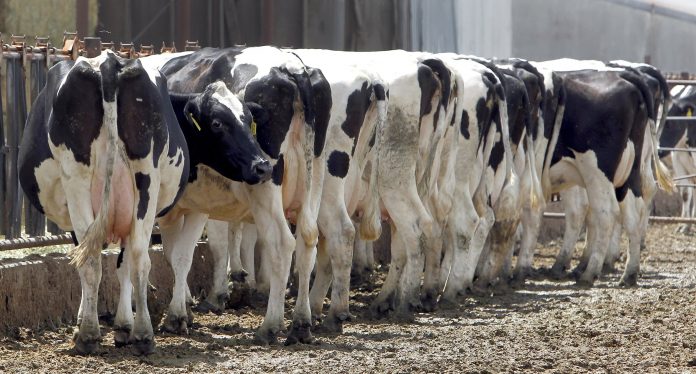 Four protesters with the climate justice coalition group Rise Up for Climate justice have locked themselves to the gates of Whareroa Fonterra factory, disrupting activity at the plant in South Taranaki. The group is calling for an end to dairy exports, PKE and industrial fertiliser now in order to halt catastrophic climate change. Today is the international day of action for the climate, co-incinding with COP26.

“As our government continues to fail to make any meaningful action on climate change, it’s up to us. Fonterra is New Zealand’s biggest climate polluter and it’s time for a transition from this destructive industry which has destroyed our lands, waters and climate for too long” says Rob Baigent-Ritchie, Anglican Priest who is currently locked on at Fonterra Whareroa dairy plant.

“We are sick of watching government after government bend to big business instead of taking the urgent action needed to cut greenhouse gas emissions and actually transition the country off fossil fuels. If the government won’t rise up for climate justice, we will” says Emily Bailey of Climate Justice Taranaki

“This massive industrial dairy exporter is heavily reliant on fossil fuels for fertiliser, production, processing, packaging and transport on top of the huge emissions from cattle belching and wastes, urea application, and deforestation.”

“140 years after the crown’s invasion of Parihaka on the 5th of November, it is apt that we in Taranaki today are targeting Fonterra, a farmer co-operative grown from colonial land theft and the country’s biggest climate and environmental polluter.”

“The government’s latest announcement declaring we’ll cut emissions to half of what they were in 2005, by 2030 is complete rubbish. They’re fiddling the numbers again comparing net vs gross emissions to pretend we’re reducing emissions when we’re not. And they’re mostly doing it buying up more forests in poor countries so we can keep polluting,” says Emily Bailey from Climate Justice Taranaki.

“It’s totally shameful and just emphasises the need for people to push back against business as usual and demand real change, not hypothetical or harmful techno-fixes and a disastrous carbon trading and offset system”

Taranaki Energy Watch spokesperson Sarah Roberts says “Rather than downshifting climate polluting industries urgently, the government is still supporting industrial dairy, fossil fuel extraction and inefficiently wasting renewable energy on making more dirty urea and hydrogen to fuel commodity exports. We are in a climate crisis. This is not the way forward.”

“Emerging technologies, like hydrogen and carbon capture, have limited application globally and unknown effects, yet we are looking at them like our ‘get out of jail free’ card. We live on a finite planet with depleting finite resources and need to accept there can be no more business as usual”, says Roberts.