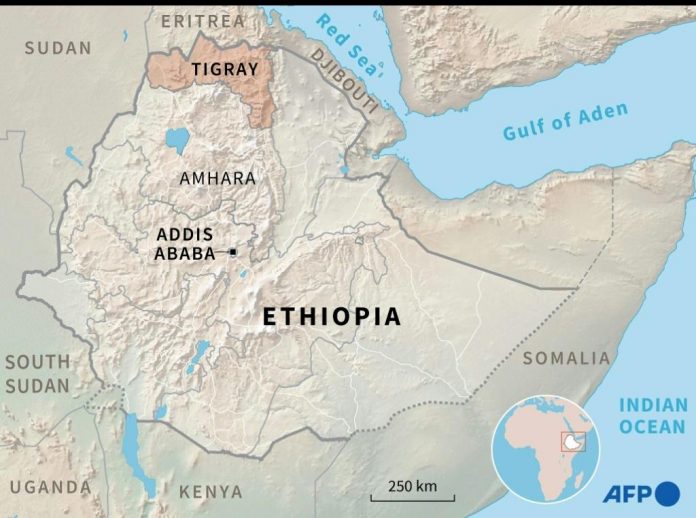 Contacts of Release International say Christian priests continue to be targeted and killed by Eritrean forces in the ongoing conflict in Tigray.

Release International warns hostility towards Christians in Eritrea is being exported to neighbouring Ethiopia, where Eritrean forces have joined in the fighting.

Release is calling UK churches to pray for Eritrea during the International Day of Prayer for the Persecuted Church on November 7.

A year ago, in November 2020, Eritrean forces killed 750 civilians in the sacred city of Aksum – including, according to Orthodox Church sources, ‘at least 78 priests’.

And the killing of priests did not stop there, says former prisoner of faith, Helen Berhane, who warns hostility towards Christians is overflowing from Eritrea.

‘Eritrean troops are killing a lot of priests and raping their wives,’ she says.

‘Some of the priests stand holding their crosses, so they cut their hands. And when the soldiers ask the priests to remove their hats, when they say no, they shoot them. Hundreds of priests are dying in this conflict at the hands of Eritrean soldiers,’ she says.

The authoritarian government in Eritrea forced most churches to close in 2002 and has arrested and detained many Christians indefinitely. Some, like Helen Berhane, have been brutally tortured.

Helen was locked up in a shipping container in the desert along with other Christians, baking by day and freezing by night. She was beaten to try to make her renounce her faith, but she refused. She is now living in Europe and continues to campaign on behalf of persecuted Eritrean Christians.

A fellow campaigner is Dr Berhane Asmelash, a partner of Release International. He says: ‘Christians have been the most persecuted group of people in Eritrea. It is because they won’t stop gathering and won’t stop worshipping. It is beyond the government’s control.’

The totalitarian government in Eritrea exercises rigid control over its citizens. Many have fled the country. According to the UN, half a million have left – up to ten per cent of the population.

‘Yet,’ says Doctor Berhane, ‘Christianity has continued to grow in Eritrea’.

UK-based Release International, which serves persecuted Christians around the world, has long been calling for freedom of faith in Eritrea.

In a spate of raids over the summer, 15 Christians were arrested in their homes in the capital Asmara. All have previously been imprisoned for their faith – some for up to 16 years. The authorities also rearrested two elderly pastors.

‘We don’t see any change in the government’s policy,’ says Dr Berhane, who believes there are upwards of 180 Christians behind bars in Eritrea.

He adds: ‘The government is not gaining anything by arresting these Christians. There are many talented people inside prison, who could contribute a great deal to their country. So, my message to the government of Eritrea is release them. Their families, their children, their wives and their husbands need them.’

Many Christians have fled to neighbouring Ethiopia, whose refugee camps offered safe haven – until civil war erupted in the Tigray region. As conflict has escalated Eritrean troops joined in the fighting, which has been marked by brutality and has caused famine.

‘Please pray for protection for these Christians,’ says Dr Berhane, ‘and pray for grace that they can receive with joy the suffering they are facing, because they’re doing it for the sake of Christ.’

Helen Berhane and Dr Berhane (no relation) featured in resources made available by Release International for the International Day of Prayer for the Persecuted Church on November the 7th. Release is also appealing to help the families of Christian martyrs and those driven from their homes because of their faith.

‘We invite Christians to remember our persecuted brothers and sisters in Eritrea,’ says Release CEO Paul Robinson. ‘We need to stand with them, help bear their burdens, and join them in prayer for a new day of freedom for their country.’

Helen Berhane offers some useful insights into how her faith sustained her to endure torture and how other Christians might fast and pray for the persecuted.

‘I fast, not to change the situation, but to discipline myself and to understand,’ she says. ‘I ask God, “What’s going on? What is happening?”

‘Always I pray and sing and read my Bible. I find encouraging words in the Bible. We are in hard times, so we need to fast and pray.’

A full range of resources for the International Day of Prayer for the Persecuted Church is available on the Release International website. Churches in the UK and Northern Ireland are invited to join in with IDOP on November the 7th, or at another time to suit them in their church calendar.

Release International is active in more than 25 countries around the world, working through partners to prayerfully, pastorally and practically support: the families of Christian martyrs, prisoners of faith and their families, Christians suffering oppression and violence, and Christians who are forced to flee.