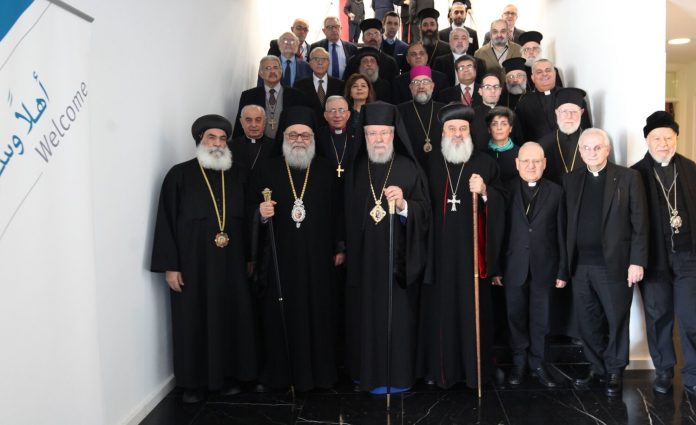 In the Middle East there are ecclesial realities that “in order to obtain assistance from some American and European Christian groups, they adopt ideas that militate against coexistence, exaggerate the suffering of Christians, and promote the theory of systematic persecution by Muslims”.

Other ecclesial subjects are betting everything on the strategy of the “alliance between minorities” or on the protection of authoritarian regimes as the only ways to ensure the survival of indigenous Christian communities in the Middle East. These are misleading choices and orientations, which risk weighing negatively on the future of the Christian presence in the Middle East and denying the same mission to which the Church called today in the part of the world has lived her earthly life.

These are some of the provocations disseminated in the document entitled “Christians in the Middle East: Towards Renewed Theological, Social, and Political Choices”.

The long and dense contribution, divided into one hundred paragraphs, is offered as a systematic attempt to consider in depth the present condition of Christian communities in the Arab-Middle Eastern context. This is an initiative that has no equal in the recent history of theological and pastoral reflection on the present and future of Christians in the Middle East.

The document, released today during an official presentation organized in the conference room of the church of Sant’Elia, in Antelias (Lebanon), is the result of the long work carried out by an ecumenical team of specialists in theology, social studies and geopolitical issues , “Men and women, ordained and lay ministers, who wanted to confront themselves with frankness and freedom also “on issues that some may consider inappropriate for a public debate”.

The team, which has taken as its initials a formula that echoes a verse from Deuteronomy (“We have chosen life in abundance”), includes, among others, Professor Souraya Bechealany, former secretary general of the Council on the Churches of the Middle East, and Maronite priest Rouphael Zgheib, national director of the Pontifical Mission Societies of Lebanon.

In many passages, the document breaks away from the stereotypes that condition and blur the dominant representation in the Western media regarding Middle Eastern Christian communities, always presented as besieged “minorities” and in need of external protection, of a financial or geopolitical nature.

Christians in the Middle East – the authors of the document acknowledge – face enormous emergencies and provocations “that put us in front of choices on which our existence and future presence depends”. The “gradual fading of our presence and witness” makes it “imperative to undertake an in-depth examination of our situation, drawing on a calm critical reading”. In the Middle Eastern geopolitical convulsions, analyzed by the document with lucid historical references to the seasons of the Arab “renaissance” and the “Islamic awakening”, the document emphasizes that the most insidious risk for the current Middle Eastern Christian communities consists in the “reductionist approach based exclusively on the logic of the majority and the minority”. A distorted reading of reality that pushes some to seek protection “through an ‘alliance of minorities’, seeing in this a guarantee of a continuous Christian presence in the Middle East”. An option that – the authors of the document argue – in the long run “distorts a genuine Christian witness”, which is based “not on the use of religion as a political tool, nor on claiming specific rights or privileges to maintain a rigid identity, but rather on opening up to the other in dialogue”.

The long document describes with realism the consequences of sectarianism and religious fanaticism as devastating factors for any project of “living with diversity” that rediscovers the “plural” matrix of the history of the peoples and civilizations of the Middle East. It is recognized that the Christian communities in the countries of the area live within societies “permeated by Islam”, and where “Islam has become an intrinsic factor” also for the ways taken by the preaching of the Gospel. It is emphasized that the emigration of Christians, which has intensified in recent decades, cannot be interpreted exclusively as a direct effect of the rise of violent Islamist movements, while many factors of “internal weakness” are also indicated with realism that weigh down the apostolic spirit of ecclesial institutions and realities. Among other things, it is acknowledged that “the language used by the religious establishment, in many cases, is still far from the daily reality, from the sufferings and fears of local Christians”, and loses its own power of attraction for the younger generations is radically growing, among which a tendency to indifferentism and even to atheism is growing, not yet ‘registered’ by ordinary pastoral directives. The document describes in critical terms the cases of competition between ecclesiastical institutions engaged full-time in trying to find financial resources to guarantee their own survival, and in several passages deplores the way in which ecclesial institutions relate to political powers, often dominated “by personal and factional interests, a minority mentality and a search for narrow sectarian conquests”.

Among the “wrong solutions” experimented with to address the problems of Middle Eastern Christian communities, the document indicates the tendency that pushes representatives and ecclesial groups “to adhere to totalitarian ideologies, authoritarian regimes”, or the race to “occupy positions of influence, and acquire benefits, and authoritarian protections” arguing that this can “guarantee the continuity and value of their presence in the Middle East”.

In addition to the critical remarks, the document also suggests constructive paths to be tested in order to face the urgencies that besiege the Middle Eastern Christian communities. The document recurs in many passages the call to rediscover the treasure of one’s own ecclesial traditions: “Most of the historical Churches of the Middle East” the authors of the text note “are patriarchal or synodal. Both systems are inspired by the idea of synodality, which, in its original meaning, refers to communion and walking together”.

These traditional features of the ecclesial life of the communities of the East need to be recovered today, while “unfortunately today in our Churches we often see the people of God – especially women and young people – marginalized in important decisions. We often see the growth of an authoritarian spirit, which cancels shared responsibility, balanced government and the spirit of responsibility between people and their pastors”. According to the authors of the document, the ecclesial life of Middle Eastern communities must free itself “from practices that reduce women to second-class beings, practices contrary to the spirit of the Gospel. Furthermore, Christians in the Middle East “should refuse to adhere to dictatorial political regimes, whether ideologically secular, theocratic or feudal, or to identify with them. They must also reject a “minority alliance” and the choice to seek protection”.

The suggested perspective is that of recognizing the commonality of destiny of Christians with fellow citizens of other faiths and “favoring their involvement in the public sphere and the struggle for a civil state”, governed according to the principle of citizenship and equality. A state “governed by modern civil law”, which is able to embrace and integrate all the “diversities” and pluralities of the Middle East