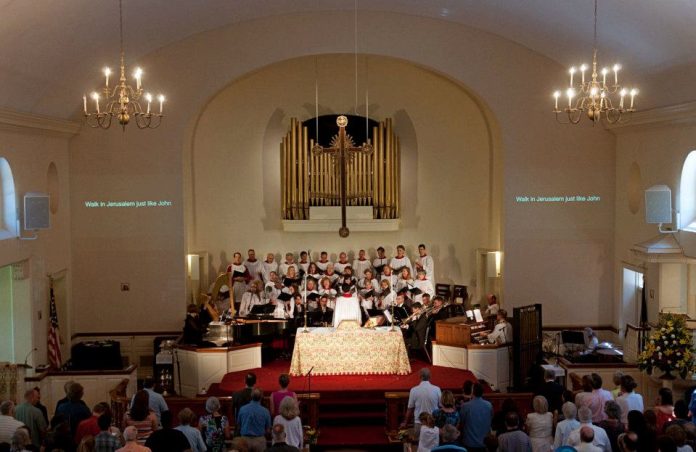 leading Anglican parish in suburban Washington, D.C. is under new leadership for the second time in a year. The latest change follows an investigation into allegations of sexual impropriety.

Truro Anglican Church interim Rector Tim Mayfield was asked to resign by the Senior Warden of the historic Fairfax, Virginia church in what was presented as the best way forward for the parish. The resignation follows the results of an investigation which concluded that two allegations of past misconduct were “credible” but did not render a verdict on the veracity of those claims. Two women within the Truro congregation first reported one year ago unwanted, inappropriate touching that occurred four years prior. That information only became known recently to the congregation, which knew Mayfield was under investigation but not for what cause.

The women did not pursue legal or civil action and did not ask for or receive financial compensation from the church.

“What Truro has experienced has been heartbreaking for everyone,” Diocese of the Mid-Atlantic Bishop John Guernsey wrote in a statement made available to IRD. “The Vestry held a lengthy congregational meeting on Sunday [August 8] and responded thoughtfully to every question. Canon Mary Hays has been appointed by the Vestry to be priest-in-charge and I am delighted by that call. She is a wise and experienced priest with a deep love for Truro, having served on staff there in the 1980s. She has been helpful to many churches going through significant transitions and I know she will be a blessing to Truro in this role.”

Mayfield strongly contested the allegations. As interim rector, he served on an at-will basis in a clergy leadership position that he assumed not long after former Truro Rector Tory Baucum departed the parish in November 2020. Baucum stated that he was to be received into the Roman Catholic Church.

Baucum himself had been subject to an investigation of tension with staff. Multiple church personnel charged that the former rector was “abusive,” “intimidating,” “coarse,” “vulgar” and “unpredictable.” The sudden departure was high profile enough that it drew coverage from The Washington Post.

A parish “Recovery and Transition Team” was active in 2020 with the goal of helping Truro “become a more godly, healthier congregation” as a church that had experienced crisis. In an end-of-year update at the conclusion of 2020, the team wrote that through meetings and interactions, Truro parishioners “shared both their griefs and their hope-filled perspectives about how they understood God to be leading us.”

In contrast with Baucum, Mayfield was more widely regarded positively. Three vestry members took issue with the decision to seek his resignation, stepping down from the parish leadership.

I reached out to Truro staff earlier this week and spoke with a communications volunteer designated by the Truro vestry to field inquiries. Truro laity confirm that a verbal announcement was read aloud to the congregation during a lengthy parish meeting but that no written or public statement was released.