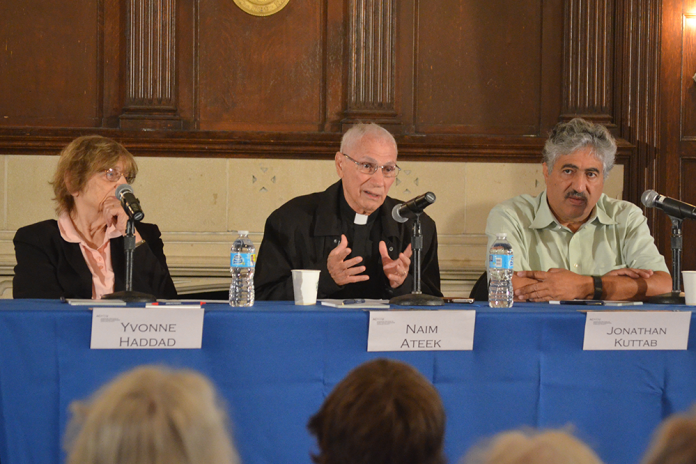 A prominent anti-Israel organization that is a fixture at mainline Protestant governing conventions has announced a new executive director following a simultaneous exodus of longtime staff.

Palestinian attorney Jonathan Kuttab will lead Friends of Sabeel-North America (FOSNA) beginning in August, according to a statement released July 22 by Mennonite Pastor Joe Roos and Episcopal Priest Brian Grieves who co-chair the group’s board of directors. FOSNA is among approximately a dozen national groups actively supporting the Sabeel Ecumenical Liberation Theology Center in Jerusalem.

In 2013, FOSNA was listed by the Anti-Defamation League (ADL) as among the top 10 anti-Israel organizations in the United States.

Kuttab, a resident of Jerusalem, serves on the Board of Bethlehem Bible College, is President of the Board of Holy Land Trust and author of Beyond the Two-State Solution. Announcement of his new role follows the sudden departure of Tarek Abuata, who had served in that capacity for the past five years. FOSNA had announced the search for a new executive director on June 21.

Roos and Grieves wrote to FOSNA supporters that Abuata decided “to seek new opportunities in service of the Palestinian people” and “we bid farewell to our remaining staff, who also have decided to pursue new paths.” The message named FOSNA National Organizer Rochelle Watson, Communications Manager Jonathan Brenneman and Data Specialist Ashleigh Zimmerman, also noting Kali Rubaii, “who left her staff position some months ago.”

Sabeel founder the Rev. Canon Naim Ateek expressed his “full confidence and support in FOSNA” in a message on June 2.

“Although I wish God’s blessings on the outgoing staff, I would like to express my full confidence and support in the Board and its co-chairs, the Rev. Canon Brian Grieves and the Rev. Joe Roos to find the right replacements so that the ministry of FOSNA will resume with the least amount of interruption,” Ateek wrote.

An interim staffer reached at the organization’s Portland, Oregon office confirmed that staff departed of their own initiative, saying only that it was “personnel issues” and declining to offer further detail. At the time of publication, the organization’s staff page had not been updated to reflect the changes and still listed five persons.

Abuata spoke most recently at Pacific School of Religion (PSR) in March at an event titled “Queer Palestinian Solidarity: A Lavender Lunch with Tarek Abuata”.

“It’s an honor to be working in queer Palestinian justice work, as we had done a lot of work — and strictly Palestinian in the past — but now we know that we cannot de-thread the two,” Abuata shared at the PSR virtual event.

Ateek’s message to the FOSNA board did not directly mention Abuata, but in the context of staff departures “at this time of transition” did speak to organizational principles.

“May I humbly remind the board of the essential foundation on which the ministry of Sabeel was built,” Ateek wrote, reminding that justice for FOSNA must be the justice that is “taught in the Bible.”

FOSNA organizes activists to be a visible presence at the United Methodist General Conference, Episcopal General Convention and Presbyterian (USA) General Assembly, among others. Boycott, Divestment and Sanctions (BDS) activists typically call for divestment from Motorola Solutions, Hewlett-Packard, and Caterpillar, among other companies that sell non-lethal products to the Israeli military. These efforts have met with mixed results: the United Church of Christ (UCC) and Mennonite Church USA have joined the PC(USA) in adopting divestment measures, while United Methodists and Episcopalians have embraced resolutions that haven’t yet resulted in financial divestment.

The organization was begun as an American affiliate of the Sabeel Ecumenical Liberation Theology Center in Jerusalem. Founded by Anglican cleric Ateek, the ecumenical group portrays Jesus Christ as a political revolutionary seeking to overthrow the forces of “empire” manifested by Rome in biblical times and later by the state of Israel and, by extension, the United States.

Sabeel’s anti-Israel message is “often intertwined with theological antisemitism,” according to Analyst Sarah Chin of NGO Monitor: “The group intertwines Palestinian nationalist ideology with its narrow interpretation of Christian theology. Through Sabeel, Ateek pushes liberation theology to justify attacks on Israel. Whether it is stripping Jesus of his Jewish heritage and referring to him as a Palestinian or disparaging Judaism and its texts, calling it ‘tribal,’ ‘exclusionary,’ and ‘primitive.’” REVEAL COMMENTS