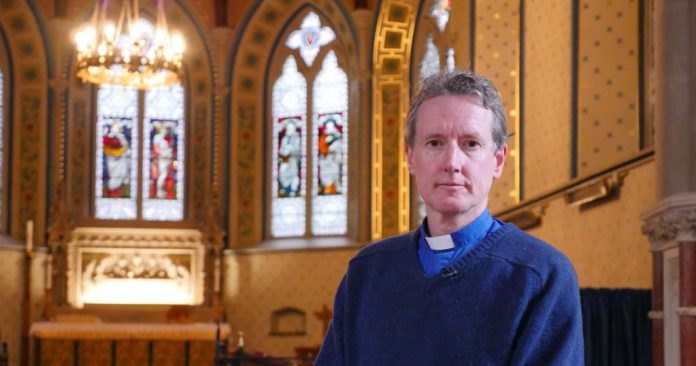 A Church of England vicar is facing disciplinary action and the sack for allegedly not following strict Covid regulation ‘guidance’ at his Dorset church.

Rev. Charlie Boyle, 52, leader of All Saints Brankscome, who is being supported by the Christian Legal Centre, faces a series of Covid related allegations which could result in his wife and four young children being thrown out of their home by church authorities.

Rev. Boyle has said pressure on him escalated when a member of the congregation complained after he carried a cross down the aisle at the end of this year’s Easter Sunday service while singing the final verse of the famous hymn, ‘Thine Be The Glory’, without a face mask on.

Rev. Boyle has an exemption for wearing a mask, due to asthma, but has worn one as much as he can out of respect to others and to ‘reassure people.’

Following the Easter Sunday complaint, Archdeacon of Dorset, Antony Macrow-Wood, met Rev. Boyle at his home and told him he should leave his post and the vicarage by the end of July, but was unable to give a clear reason why.

After this meeting, Rev. Boyle received an extraordinary letter on 24 June 2021 from the Archdeacon detailing the allegations which would form a Clergy Discipline Measure (CDM) against him.

Allegations included accusations that Rev. Boyle had risked contaminating the church by returning bibles to the building that had been removed to protect church members as they could be ‘touched.’

Another allegation included him being chastised for hugging a mourner, who was upset and grieving, following a funeral service he led at the church.

After conducting a family service online from a beach hut he rents in his parish in order to try and be more engaging for the children during the pandemic, Rev. Boyle was told he had broken the regulations as this was ‘not permitted.’

Rev. Boyle was also accused of not taking full responsibility for risk assessments for the church, which he completely refutes based on extensive evidence.

Throughout the pandemic, the government has given guidance, backed by the Church of England, that has resulted in police storming places of worship and shutting down services.

Church leaders were at one point even curtailed from praying in church buildings.

New health secretary, Sajid Javid, has announced this week that all restrictions on communal worship, including singing, will lift on July 19th.

Members of Rev. Boyle’s congregation have rallied to support him after discovering that he had been asked to leave, particularly as he was unaware of the allegations against him.

One message of support said: ‘‘Having discovered to my horror that Charlie and Sarah Boyle are being asked to step down from their present roles, I felt it only fair and right to let you have my input as someone who has been quite actively involved with them since they arrived 8 years ago.’

Another said: ‘I know there can always be difficulties in any parish, not least leading a parish through a pandemic. Charlie has achieved this admirably in my opinion.’

Furthermore, a member of the congregation said: ‘Revd. Charlie Boyle has brought a vibrancy to All Saints during the past eight years and a younger congregation have embraced the church wholeheartedly with him at the helm. It has been a wonderful experience and he should be congratulated on the work he has achieved.’

Despite this, Rev. Boyle has continued to receive aggressive and intimidating emails and calls from the Archdeacon urging him to get legal representation while he continues to ‘gather evidence.’

The retiring Bishop of Salisbury, Rev. Nicholas Holtam, has also backed the Archdeacon’s position, stating in a letter to Rev. Boyle that:

‘On the basis of the information provided by the Archdeacon, he and I have been advised that there appears to be sufficient substance and seriousness for him to make a complaint…if he does so and that complaint is upheld it would lead to a penalty being imposed which would be a serious blemish on your record.’

‘I won’t give up my calling’

Rev. Boyle, a former lawyer and local councillor who studied at Cambridge, said: “I am deeply saddened and hurt that Covid regulations are being used as an excuse by the church hierarchy to bully me and my young family.

“Despite the pressure on me, which has affected my health, I am not going to give up on my calling just because I sang ‘Thine Be The Glory’ on Easter Sunday in church without a mask.

“Furthermore, I am shocked that one of the allegations against me is that I brought Bibles into a church.

“During the pandemic, due to government guidance, churches and their congregations have become places of division and fear instead of the places of prayer, refuge, worship, outreach and hope they should be.

“We must all take precautions of course, but we also have to ask the question of what Jesus would do in such a crisis?

“Churches have been forced to capitulate to government and Church of England guidance and have been prevented from supporting their communities in the biggest crisis since the war.

“I have done everything possible to reassure and protect people’s material, emotional and spiritual well-being.

“People are desperate, fearful and very cautious. What they miss most is singing in church and worshipping their God.

“As all restrictions lift on July 19th, my family and I would like to get on with the job and calling we have of serving the local community and helping to restore hope in Jesus’ name.”

Andrea Williams, chief executive of the Christian Legal Centre, said: “The allegations and threats against Charlie Boyle and his family are intimidating and need to be dropped.

“It cannot be right for a passionate Christian leader who has inspired his community and brought young people into the church, to be bullied out of his job on the basis of what appear to be farcical allegations.

“The church hierarchy in this case is putting government ‘guidance’ ahead of the need of churches and their leaders.

“This is a crucial moment as churches prepare to emerge from this pandemic. 65% of churches across the country do not have children as part of their congregations. Yet here you have a leader seeking to find ways to reach young families with the gospel being chastised and bullied for doing so.

“Charlie Boyle is a faithful servant of Jesus Christ who has taken all reasonable precautions and guidance to protect his congregation. No non-covid allegations have been brought against him.

“As any restrictions on communal worship lift in the coming weeks it is time for draconian pressure on church leaders to lift so that they can get on with the important jobs they have been called to do.

“We will stand with Charlie Boyle whatever happens in the weeks ahead.”