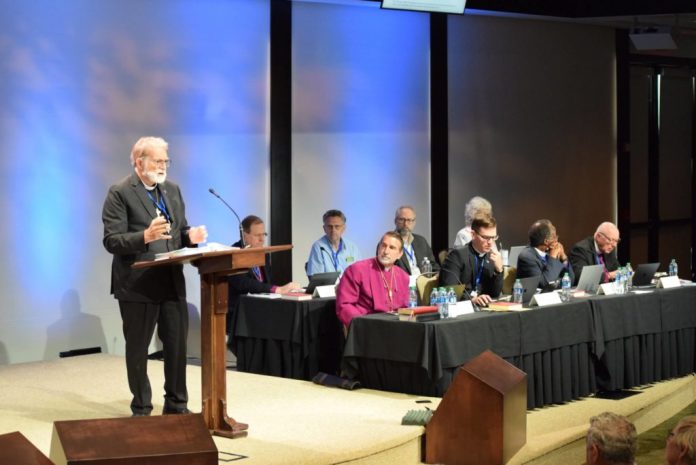 Anglicans are reporting better-than-expected numbers for 2020. The Anglican Church in North America (ACNA) kept the same number of congregations from 2019 to 2020 (972) and only saw slight declines in membership and attendance.

Membership dipped from 127,624 in 2019 to 126,760 in 2020, a loss of 864 persons (0.68%), while attendance dropped from 84,310 in 2019 to 83,119 in 2020, a loss of 1,191 (1.4%). In-person attendance was measured during the months of January and February due to COVID restrictions that limited in-person church services for much of the remaining year. A larger drop had been expected, explained ACNA Director of Communications the Rev. Canon Andrew Gross, as the customarily well-attended holy days of Christmas and Easter were not included.

The numbers were made available at the annual ACNA Provincial Council held at the Billy Graham Training Center in Asheville, North Carolina June 15-16. The Council has a governing role in the Anglican province and includes four delegates (diocesan bishop, clergy and two lay members) from each of the denomination’s 29 dioceses and special jurisdictions/missionary districts (I serve as a lay delegate from the Diocese of the Mid-Atlantic and recently completed a three-year term on the denomination’s Executive Committee).

ACNA continues to experience widely varying numerical changes across dioceses, with some reporting gains in membership and attendance, including the large Diocese of Churches for the Sake of Others (C4SO) which added 1,046 members (10%) and 1,907 attendees (11.7%). Some dioceses declined, including the Missionary Diocese of All Saints, among the smallest of ACNA jurisdictions: it experienced a 302 person (23.4%) drop in membership and a 194 person (24.9%) drop in attendance. If this rate of decline continues uninterrupted, the diocese would cease to exist in three years’ time. (See below for congregational reporting submitted by the Director of Communications).

Unlike in the Episcopal Church, ACNA dioceses can geographically overlap and transfer congregations from one to another, which can result in a one-time increase or decrease.

Ghosts of Bishops Past

Delegates approved a series of canonical changes, which must also be approved by the larger ACNA Assembly (next scheduled to meet in 2024) before they take effect. Assembly is constituted by a larger number of delegates than Provincial Council based upon the attendance of each member diocese.

Most of the proposed changes, drafted by the Governance Task Force, met with little controversy. Exceptions were those involving the discipline or inhibition of a bishop.

Delegates shared recent examples that weighed heavily in their approval or rejection of the proposed changes, and two figures not present at the Council were nonetheless influential. They included both Former Episcopal Church Presiding Bishop Katharine Jefferts Schori, whom delegates argued abused her disciplinary authority to remove theologically orthodox bishops from the denomination that many ACNA members were previously a part of.

The example of former ACNA Diocese of the Great Lakes Bishop Ronald W. Jackson was also cited. Jackson stepped down in 2020 for health reasons after allegations of misconduct. Jackson was ultimately deposed as a bishop by the ACNA College of Bishops in June of 2020, but not until after he had destroyed some evidence related to the use of pornography across many years. Members of the Governance Task Force proposed canonical changes that would give the next Archbishop the authority to inhibit a bishop for not more than 60 days. They also incorporated a series of checks and balances intended to prevent abuse of that authority, including a requirement that three of the five senior most bishops in the province assent to a godly admonition, while necessitating the agreement of all five to inhibit a bishop. Action by the College of Bishops would still be required to depose a bishop.

After a close vote with a show of hands, Council delegates gave their approval to the canonical change.

Dean for Ecumenical Affairs Bishop Ray Sutton shared about ongoing conversations with United Methodists. A vote to separate the second largest U.S.-based Protestant church into two or more denominations is widely expected to occur in summer 2022 at General Conference in Minneapolis, but some clergy plan to enter Anglicanism. United Methodist congregations with a theologically orthodox majority will potentially join a new Global Methodist Church, but individual clergy and laypersons are making inquiries with ACNA dioceses and even actively planning to join the Anglican Church. Officials with at least two dioceses have appointed clergy to serve as liaisons with United Methodist colleagues exploring ACNA ministry.

Bishop Derek Jones of ACNA’s  Special Jurisdiction of the Armed Forces and Chaplaincy provided an update on Anglican Chaplains, which now number more than 250, making them the largest Protestant group of liturgical chaplains.

Jones reported that the Special Jurisdiction has been engaged with religious liberty matters, including the Fulton v Philadelphia case recently ruled upon by the U.S. Supreme Court. The ACNA participated in an amicus curiae (“friend of the court”) filing alongside other briefs from the National Association of Evangelicals, several Roman Catholic dioceses and religious freedom advocates in support of Catholic Social Services (CSS). The City of Philadelphia sought to disqualify CSS from serving as a foster care placement agency due to the group’s conviction that it not place children with same-sex couples, consistent with Roman Catholic teaching. Religious Left groups, including the President of the Episcopal Church House of Deputies, filed their own amici curae to support the City of Philadelphia’s position (Justices issued a unanimous ruling on June 17 in favor of CSS).

A follow-up article will discuss Archbishop Foley Beach’s report and the College of Bishops meeting.