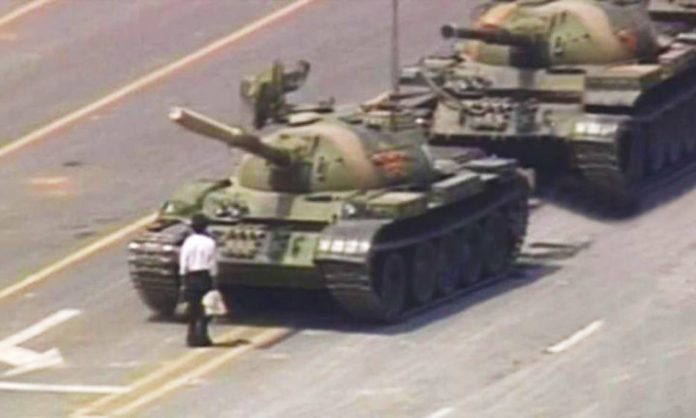 On the 32nd anniversary of the Tiananmen Square massacre, Release International is again urging China to grant full religious freedom for its citizens.

Nobody knows how many were killed in what has come to be known as the Tiananmen Square massacre. Christians were among the protestors. Today Christians continue to be arrested for their faith, churches demolished and crosses torn down, in the continuing clampdown on freedom in China.

‘Chief among all freedoms is the freedom to believe,’ says Paul Robinson, CEO of Release International, which supports persecuted Christians around the world. ‘And despite its constitutional guarantees, China is continuing its crackdown on Christianity.

‘In the past few weeks Christians have been arrested on the streets for preaching the gospel, a leading pastor has been beaten up and hospitalised by an official who threatened to kill him, and almost 200 weeks have passed since the disappearance of Christian human rights lawyer Gao Zhisheng, who stood up for religious freedom.

‘Release International again urges China to recognise the God-given right of its citizens to worship freely.’

The Tiananmen Square massacre ended democracy protests by up to a million Chinese. It brought to an end moves to permit more freedom by Hu Yaobang, the general secretary of the Communist Party. Hu had encouraged democratic reforms, but was forced to resign his post.

On the day of his funeral in April 1989, thousands of students began to gather in Tiananmen Square calling for reforms. Their number swelled to around 1,000,000. But hardliners declared martial law and sent the tanks into Tiananmen Square on the evening of June 3.

Despite assurances that no protestors would be hurt, the Red Army opened fire on demonstrators and crushed those in its path.

According to the official Chinese version of events, 200 civilians and several dozen security personnel were killed. But diplomatic sources put the death toll as high as 10,000.[1]

‘China never talks about Tiananmen Square – the subject is taboo,’ says Paul Robinson. ‘Now 32 years later, the Chinese authorities are tearing down churches and arresting pastors, and have banned online church services and prayer meetings during the Covid pandemic.’

As China tightens its grip in Hong Kong, pastors have been accused of ‘succession and subversion’ and have been driven into exile. They include the president of the Baptist Convention, Pastor Lo Hing-choi.[2]

China has also arrested more than a million Uyghurs, who have been rounded up into re-education camps. Although most are Muslims, a minority are Christians. They include Alimujian Yimiti, who was sentenced to 15 years in 2008 for allegedly leaking state secrets. He was arrested after the authorities eavesdropped on a conversation with a Christian friend – about state surveillance.[3]

For more than a decade, China has been detaining its human rights lawyers, who stand up for the rule of law in the courts. Christian lawyers include Zhang Kai and Jiang Tianyong, who took legal action to try to prevent the authorities tearing down crosses from churches across China.

Zhang Kai was accused of ‘endangering state security’. Jiang Tianyong was jailed for ‘incitement to subvert state power’.[4] He claimed to have been hung from the ceiling and beaten – along with other lawyers under detention. Both were forced to make televised confessions. Jiang Tianyong remains under house arrest.

Next week will mark the 200th week since the disappearance of Chinese Christian lawyer Gao Zhisheng, who was taken by the authorities and severely tortured.[5]

Gao was warned he would be killed if he spoke publicly about the torture he endured during detention. He went on to document that torture in detail and disappeared again. He has been missing since August 13 2017 and his whereabouts are unknown.

Gao was the director of the Beijing-based Zhi Sheng law firm. His wife and two children have escaped to the United States.

The crackdown on Christianity in China continues unabated. In the space of a week, Release International partner ChinaAid has reported the arrest of nine Christians for preaching the gospel on the streets. They were detained for between 10 and 15 days.

At the same time, police arrested and held many members of the unregistered Local Assembly house church in Beijing.[6]

And Release partners report a violent attack on pastor Yang Hua of Living Stone Church, Guizhou Province. According to ChinaAid, an official arrested the pastor without charge, knocked him to the ground and warned him: ‘I can beat you to death’.

When Pastor Yang replied: ‘Whatever you want to do is fine, I will not fight back,’ the official grabbed him by the neck and slapped him. He beat the pastor so violently he had to be taken to hospital by ambulance.[7]

‘That is the harsh reality facing Christians today in China,’ says Paul Robinson. ‘Our partners say the crackdown on Christianity is as bad as at any time since the Cultural Revolution,’

Article 36 of the Chinese Constitution safeguards the right and freedom of Chinese citizens to hold religious beliefs. It guarantees those rights will not be removed and citizens will not be discriminated against for their religious views.

However, last year, the US State Department designated China as a country of particular concern, and the United States Commission on International Religious Freedom has followed suit.

They report: ‘Religious freedom conditions in China deteriorated. The government intensified its “sinicization of religion” policy, particularly targeting religions perceived to have foreign connections, such as Christianity… The government also continued to demolish both Catholic and Protestant church buildings and crosses under its sinicization of religion campaign.’

(Sincization, as directed at the Church, is a policy aimed at making Christianity more Chinese in its expression. It’s been interpreted as a carte blanche for tearing down Christian symbols, including crosses.)

Says Paul Robinson: ‘We urge China to do nothing more than honour its own constitution.’

Yet despite the persecution Christianity is growing rapidly in China. Even by conservative estimates there are now more than 100 million Christians in the country, outstripping the membership of the Communist Party.

‘Chinese church history under 70 years of communist persecution shows that this new wave of repression will only revive the church and accelerate church growth,’ says Paul Robinson.