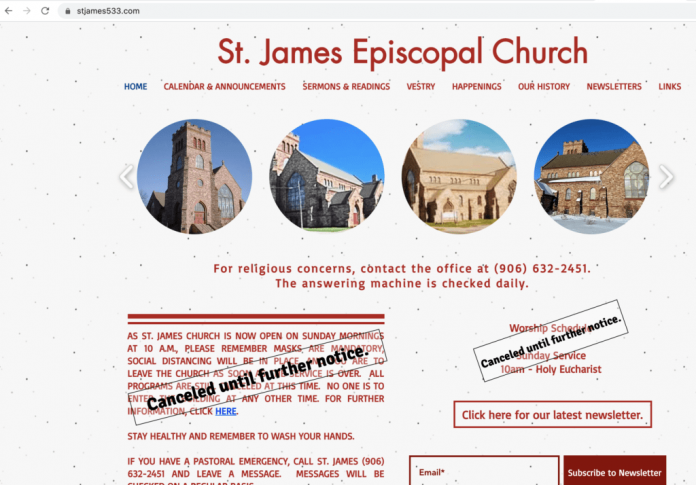 Many churches that were closed to in-person worship for much of the pandemic are preparing to re-open. It remains to be seen how many of their congregants will reappear and how many have vanished, never to return.

Parts of the Episcopal Church ceased services altogether – streaming or otherwise – with parishioners directed to either a diocesan-wide virtual service or to the Washington National Cathedral.

The Episcopal Diocese of Northern Michigan is one such jurisdiction. Tiny even by Episcopal standards, the grouping of 21 Upper Peninsula congregations accounted for a combined weekly attendance of only 385 persons in 2019, well before pandemic restrictions began. The diocese reports an attendance decline of more than 38% in the past decade.

Population exodus and aging have brought about this decline, accelerated by a lack of evangelism attributable to pervasive universalist theology in one of the denomination’s most revisionist dioceses. Diocesan statistics show seven baptisms in 2019, two confirmations, three received from other denominations and 13 marriages. In contrast, there were 35 burials that year – representing 9% of the entire diocesan attendance in a single year.

Now restrictions intended to minimize the spread of COVID appear to have finished off a diocese that was already dying in 2019.

The diocese still lists a pastoral directive from March 2020 as the most recent news item on its web site directing “to cease all other Sunday, Saturday and weekday in-person gatherings.” It lists no upcoming events. The last posted diocesan newsletter was in June 2020.

Local parishes are a similar story. St. James Episcopal Church in Sault Sainte Marie blasted the words “Cancelled until further notice” across its web site until Friday, when it – finally – announced a planned return to worship on March 28. That update only came after its cancellation notice spread on Twitter.

What kind of message does it send the few remaining faithful to have “cancelled” splashed all over the web site of one of its leading parishes?

Not only is church cancelled but no alternatives are offered a year into the pandemic.

“It is important that you remember, even though church services are canceled at this time, pledge cards and pledges are still needed to keep the church operating,” reads the parish announcement page. “The church will continue to be closed to everyone.  No one is to be in the building any other time.”

The church web site states that “for religious concerns” messages can be left on an answering machine.

Translation: this church won’t serve you, but remember to keep serving us.

Based upon 2019 numbers, St. James (measured by attendance) is in the top five congregations of the diocese with an average weekly attendance of 30 and a membership of 71. The parish lists plate-and-pledge revenue of $32,209 that year.

The newsletter goes on to report:

I’ve seen enough. The Episcopal Diocese of Northern Michigan is no longer dying; it is dead.

UPDATE [3/23/2021]: I was interviewed this morning on local radio in Lansing, Michigan about the effective collapse of the Diocese of Northern Michigan. That 10-minute broadcast can be heard by clicking here.