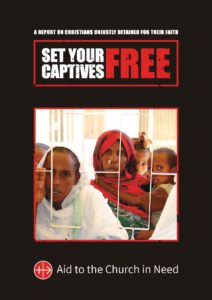 THE PLIGHT OF CHRISTIANS who are kidnapped or unjustly jailed is the focus of a fresh report produced by Catholic charity Aid to the Church in Need (ACN). Set Your Captives Free: A Report on Christians unjustly detained for their Faith—produced by the UK office of ACN—profiles individuals of different ages who have been kidnapped by extremist groups or arrested by the state and held without charge.

Among them is Maira Shahbaz, a Pakistani Catholic teenager who was abducted at gunpoint and forced to marry and convert to Islam. She escaped her captor and remains in hiding with her family. ACN has petitioned the UK government to grant her asylum.

Report editor John Pontifex said: “In different parts of the world, Christians are unjustly denied their freedom, many for the precise reason that they refuse to give up their faith. They live in fear and many suffer in complete silence. Who is there to be their voice? Set Your Captives Free gives them the chance to tell their stories, call for justice, and appeal for liberty.”

The report, the first of its kind by the charity, complements other ongoing ACN research projects including the Religious Freedom in the World report and Persecuted and Forgotten? A Report on Christians oppressed for their Faith. It is intended as a springboard for ACN supporters to advocate for the release of those unjustly detained and demand perpetrators be brought to justice.