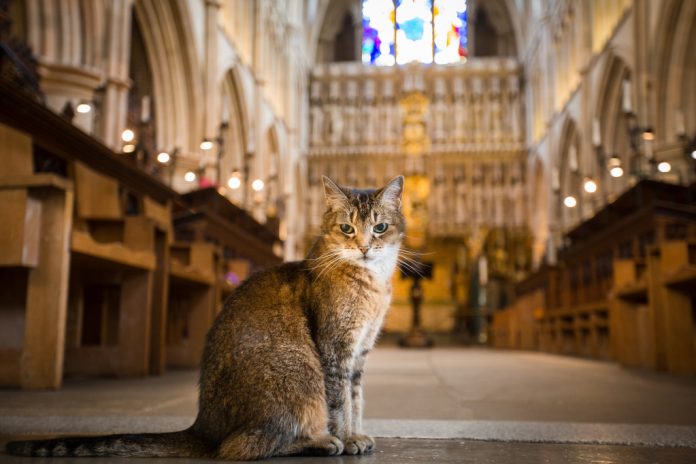 PETA, the People for the Ethical Treatment of Animals, has called upon the Bishop of Burnley to resign after he criticized a cat’s funeral celebrated by Southwark Cathedral. A cat was just as much a member of the Church of England as a person, the animal rights group averred, demanding the bishop be dismissed for the crime of speciesism.

Last week the Dean of Southwark, the Very Rev. Andrew Nunn held a Service of Thanksgiving for Doorkins Magnificat, a 12 year old tabby that made its home in the cathedral. The dean told the assembled congregation: “In more normal times, we often host memorial services for the great and the good. But I don’t think there’s ever been a service for a cat,” before interring the cat’s remains in the churchyard on 28 Oct 2020.

In his eulogy, the dean said: “Some may think that cats don’t deserve ceremonies and eulogies and prayers, that their death should pass without comment or occasion. But I can’t agree and I’m not particularly a cat person, or at least I wasn’t before I met her, but this little cat, who arrived at our door, who chose us and stayed changed our lives and enhanced our mission and ministry.”

Writing on his blog, Dean Nunn said: “When we think about who we are as a cathedral we think about Doorkins, just arriving, gradually finding confidence to come in, and then stay, becoming part of the community. She found a place where she could be fed and loved. She found a safe place where people accepted her and let her be who she was. And she made the place softer and gentler and more accessible for the thousands who arrived just to see if they could see her and get a picture they could take away with them.”

Named by his predecessor, the Very Rev. Colin Slee after the atheist philosopher Richard Dawkins, Doorkins the Magnficat became a successful marketing venture for the cathedral.  Doorkins Magnificat greetings cards, mugs, mouse mats, fridge magnets and a children’s picture book are sold by the cathedral — and the late feline had her own Twitter account with over 6,000 followers.

“Thank you, Doorkins and thank you, God, for giving us such companions out of you good creation. Amen,” Dean Nunn observed.

News of the ceremony on twitter prompted Bishop North to respond. “Is this a joke? I do hope so. If not it’s grossly insensitive to bereaved families and those ministering to them in the NW under the regional coronavirus restrictions.”

Bishop North’s rebuke of Southwark’s mawkish celebration of the late tabby, prompted PETA to seek justice for Doorkins. Triggered by the bishop’s insensitivity and animus towards quadriped Anglicans, PETA wrote to the Archbishop of Canterbury demanding the dismissal of the northern province suffragan.

The Southwark News reported PETA told the archbishop Doorkins was “no less a parishioner because she had four legs rather than two,” adding: “How can he possibly think, much less say, such a thing? Honouring the life of a beloved animal takes nothing away from those who have lost loved ones in this pandemic or in any other way.”

“For those who knew, cared for, and loved Doorkins Magnificat, the service provided a chance to mourn – and remember – this wonderful cat who drew people to the cathedral, brought joy to so many, and was no less a parishioner because she had four legs rather than two.”

“The central tenet of Christianity is kindness towards all of God’s creatures – including those who have fur, feathers, or fins. If the Bishop doesn’t understand that, we ask that he resign from a post that he’s not fit to hold,” it said.

The Church of England has not responded to the call for the bishop to be dismissed for the crime of speciesism, and Philip North appears to have gone to ground.