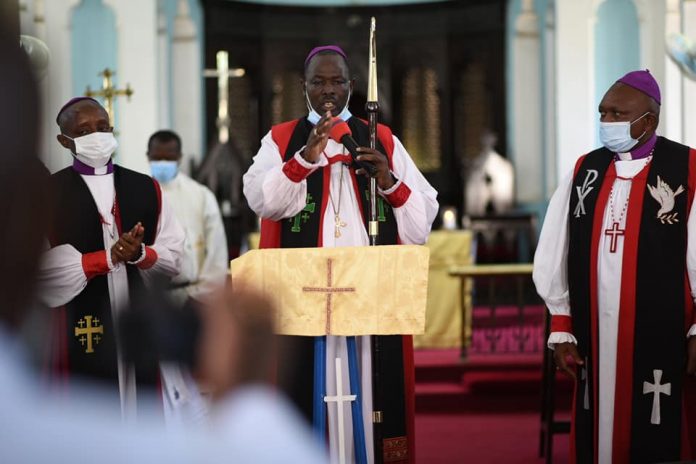 The Primate of the Anglican Church of Kenya inaugurated a national series of celebrations from Mombasa Memorial Cathedral yesterday marking the 50th anniversary of the formation of an independent Anglican Church in Kenya.

The Most Rev. Jackson Olew Sapit, accompanied by the bishop of Mombasa, the Rt. Rev. Alphonse Baya, and the Bishop of Malindi, the Rt. Rev. Lawrence Dena, marked the anniversary with worship at the cathedral and the installation of commemorative markers and the planting of trees around the cathedral close.

In his sermon of 25 Oct 2020 from the Memorial Cathedral in Mombasa, Archbishop Sapit spoke to the politicization of churches, saying the Anglican church did not welcome politicans speaking from the pulpit.

“We must guard the pulpit in the church so that even if somebody comes to worship, then their space is in that pew,” he said.

Allowing a politician to speak from the pulpit clothed his words with the mantle of the church, he warned. Churches needed to “test” the words of politicians to ensure they promoted the gospel of Jesus Christ, rather than party interests.

“Are we giving politicians and other people an opportunity to come and promote that which is not Christian? That is why we say as the Anglican Church, we don’t have that space available” for politicians to usurp church pulpits.

The archbishop also spoke to state economic development plans, and urged the government to create a culture of self-reliance and self-sufficency. “Let us focus on the individual, empowering them not just by giving handouts but empowering them by doing something to their knowledge and change mindset at the heart level,” said the archbishop.

And he asked politicians to put the needs of the country above their political interests. “Let us engage in the process of making the right decisions for posterity, not decisions around my interest, my needs or myself,” he said.