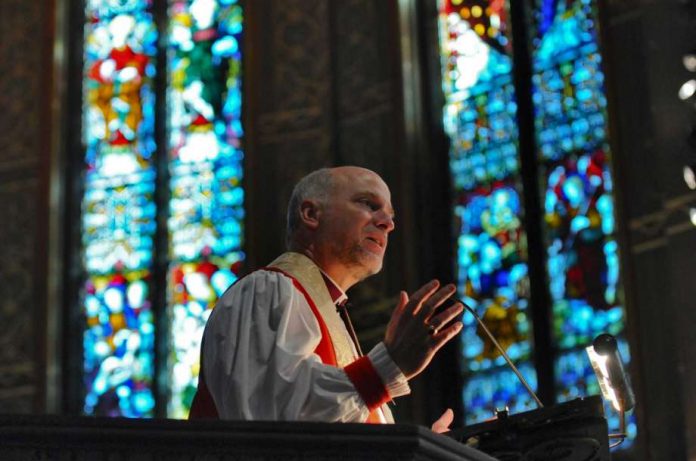 The Rt. Rev. William Love told the 152nd meeting of the Diocese of Albany synod that he will step down from office as bishop effective 1 February 2021. The announcement was made during his presidential address to the diocesan convention on 24 Oct 2020.

He stated in his presidential address:

As I reported to the Diocese on October 5th, the Hearing Panel has found me guilty of failing to abide by the Discipline and Worship of the Episcopal Church, and thus violating my ordination vows. They issued a 42-page document outlining their decision, a copy of which has been posted on the Diocesan Website.

The Summary of Opinion outlining the Panel’s report, states: “This Panel unanimously concludes that TEC has met its burden of showing, by clear and convincing evidence, that Bishop Love has violated Canon IV.4.1(c) in that his November 10, [2018] Pastoral Directive violated the Discipline of the Church, as Resolution B012 was properly constituted and passed as an authorized revision to the BCP as expressly provided for in Constitution Article X, thus requiring that all Bishop Diocesans permit their clergy the option to utilize such rites. TEC has further met its burden of establishing that Bishop Love’s Direction also violated the Discipline of the Church in that it violated Canon I.18. The canonical legitimacy of Resolution B012 rendered Canon I.18 mandatory, requiring adherence by Bishops Diocesan in permitting their Clergy the option to perform same-sex marriage rites. TEC has also met its burden of establishing that the Direction violated the Worship of the Church in that Resolution B012 added canonically-authorized same-sex marriage rites to the Worship of the Church pursuant to BCP.”

It is my belief and that of my legal team that B012 was presented as an alternative resolution to one which would have changed the BCP. It was intended to ensure that same-sex marriages would be allowed in every Diocese, regardless of the Diocesan Bishop’s theological views regarding marriage, while at the same time not changing the 1979 Prayer Book.

With that said, while I don’t agree with the Hearing Panel’s ruling, they have issued their judgement. Unfortunately, given the nature of this case, and the Episcopal Church’s demonstrated intent to ensure all dioceses (where civil law permits) allow for same-sex marriages, I have no reason to believe that appealing the Hearing Panel’s Decision would result in any different outcome.

A second meeting of the Hearing Panel under the leadership of Bishop Knisely, was scheduled for this coming Monday, October 26th, to determine what disciplinary action should be taken against me. After much thought and prayer, recognizing that whatever disciplinary action would be offered would not be anything I could in good conscience agree to, I have made the very difficult, but necessary decision to resign as Bishop of Albany, effective February 1, 2021 – the 14th Anniversary of my becoming the Bishop Diocesan. Given all that has happened, and that which was still to come, I believe that to stay any longer would be more of a detriment to the Diocese than a help.

The Most Rev. Michael Bruce Curry, Presiding Bishop of The Episcopal Church and I, the Rt. Rev. William H. Love, Bishop of Albany voluntarily entered into an Accord which became effective October 21, 2020, with the unanimous approval of the Disciplinary Board of the House of Bishops. The Accord resolves the matter of my case, thus discharging any further action from the Hearing Panel.

The Accord stipulates the following: I will resign as Bishop Diocesan of the Diocese of Albany, effective February 1, 2021; I will begin a one month terminal sabbatical beginning January 1, 2021; I agree to continue to abide by the January 11, 2019 Restrictions placed upon my ministry by the Presiding Bishop until the effective date of my resignation as Bishop; I will work with the Presiding Bishop through the Office of Pastoral Development to help foster a healthy transition from my leadership as Bishop Diocesan, as the Diocese begins a new chapter in its history; and lastly, I acknowledge that upon February 1, 2021, the effective date of my resignation as Bishop Diocesan, my November 10, 2018, Pastoral Directive regarding B012 will lose force. Until then, however, it remains in effect.