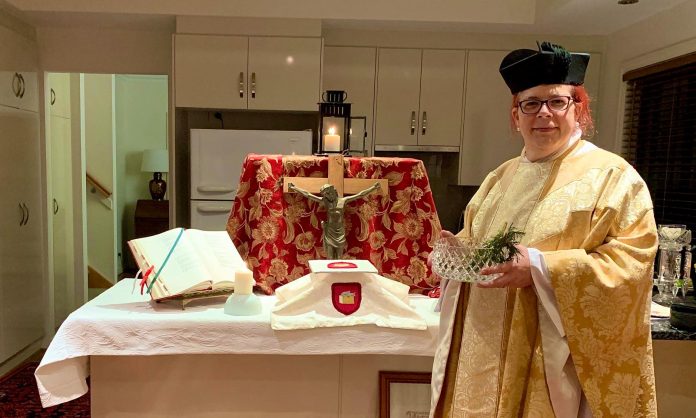 A couple of recent events, similar to each other yet also radically different, serve to demonstrate the vastly different approaches being taken by our most senior leaders in the Anglican Church of Australia on the most pressing issues before us. It is now perfectly obvious that some of our leaders are more than prepared to maintain the doctrine and practice of the national body and the agreements that they signed up to. Some aren’t.

Two very recent events have made this clear.

The first is the recently publicised story of Sorèl Coward. Sorèl is a male-to-female transgender person. Sorèl tells her own story in a public published Facebook post (link)

The facts as Sorèl relates them are these

On what basis did Smith make this decision not to grant a PTO? Coward has also published the letter than Smith sent and in it the reasoning is clearly set out:

Smith’s letter will be very encouraging to all those who are looking to their senior leaders to uphold not only the doctrine and discipline of the church but also our polity.

He notes that she is presenting as a woman married to a woman and that the church does not currently authorise such marriages nor bless them. He also observes that, given the tense political situation at the time over this issue (my description, not his), “it would be inappropriate at this time for me to issue you with a PTO”. To do so “would be to get ahead of where the Church currently is on matters”.

Interestingly Smith holds open the possibility that a PTO may be granted in the future if the Church’s position changes. That stands somewhat in contrast to Cowards claim that to

Long-time readers of davidould.net will note that Archbishop Smith’s response is entirely in the spirit of the Bishops’ Agreement of 2018 where they pledged not to move forward on these matters unilaterally.

Another senior leader who also signed up to that agreement was Archbishop Philip Aspinall of Brisbane, former Primate from 2004 to 2014. There is a remarkably similar case to Coward’s that is bubbling away in his own diocese but Aspinall’s approach is almost diametrically opposite to that of the Primate.

The Diocesan website of Brisbane (the “Diocese of Southern Queensland”), Anglican Focus, has published a piece promoting one of the already most well-known marriages in the Diocese, that of Penny and Josephine Inkpin. Josephine is also a male-to-female transgender person who has remained in their marriage. When Inkpin originally “came out” the Archbishop was full of praise and support.

Our article at the time raised the very same issue which has challenged Archbishop Smith:

Obviously Inkpin’s situation is different to that of Coward. Most significantly Inkpin had remained in ordained ministry so the removal of a PTO may not have been the best solution at the time (and obviously not one that Aspinall would have seriously considered).

Nevertheless the underlying tensions that Smith recognises remain. Given the moment that the Anglican Church of Australia finds itself in with respect to same-sex marriage and given the Bishops’ commitment not to act unilaterally nor outside national constitutional mechanisms, it seems remarkable that the Inkpins’ marriage is so regularly publicised. It is also notable that the Archbishop recently hosted a renewal of their wedding vows in the Cathedral.

The Diocese has taken every opportunity to promote them as a model of a marriage in ministry.

How can any of this possibly be considered as upholding the spirit of the agreement that Archbishop Aspinall and all the other bishops signed up to? Under Archbishop Aspinall’s leadership, his Diocese has not just endorsed a same-sex marriage but held it up as an exemplar.

The Primate carefully but clearly upholds both the doctrine and the agreed polity of the Anglican Church of Australia. Nobody expected any less of him.

His predecessor seems determined to do the exact opposite. No wonder we’re in a mess.