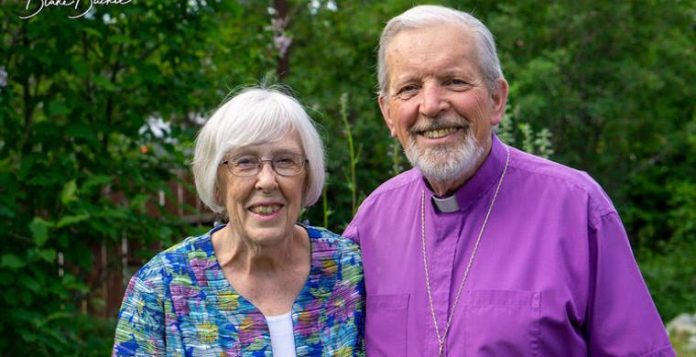 THE HIGH SCHOOL DROPOUT who eventually became an Anglican Archbishop has died at the age of 80.

Bishop Terry Buckle died on Sept. 10th in Whitehorse, Yukon, after a lengthy battle with cancer.

Although he was born in southern Ontario, Terrence “Terry” Owen Buckle was most at home in the Canadian North. He and his wife Blanche moved to the Arctic in 1966 and served there together for 54 years.

He was Bishop and later Archbishop of Yukon from 1995 to 2010 and Metropolitan of British Columbia and Yukon from 2005 until 2010, in the Anglican Church of Canada (ACC).

However, in 2018, in his retirement, he left the ACC and realigned with the newer, more theologically conservative denomination, the Anglican Network in Canada (a diocese of the continent-wide Anglican Church in North America).

Probably the most trying year for Bp. Buckle was 2003 when he found himself both respected and reviled by his fellow Anglicans.

In 2002, the Synod of New Westminster had voted to bless same-sex unions and in protest, the theological conservatives, among them theologian J.I. Packer, had walked out of the Synod.

A few months later Bp Buckle offered alternative episcopal oversight to the New Westminster parishes who were unwilling to continue under Bishop Michael Ingham after he approved the controversial blessings.

Bp Buckle was a strong supporter of the Essentials movement and his offer was warmly greeted by most of the Essentials leadership. Yet while the evangelicals supported Buckle, grateful for his courage, some of the local charismatic clergy (Ed Hird, Barkley Mayo, Silas Ng and Paul Carter) who were part of the Anglican Renewal Ministries were not supportive of his proposal, and decided instead to place themselves under Rwandan episcopal leadership. This weakened the Essentials leadership, locally and nationally, and probably had a major role in Bp Buckle’s eventual withdrawal of his offer.

There was no procedure in place for the unprecedented offer of alternative episcopal oversight (AEO) and Buckle was threatened by the church hierarchy with trial and discipline. It was a politically explosive situation, and the Provincial House of Bishops, led by Abp David Crawley and Bp Ingham mobilized, successfully, to sanction Buckle. The offer was rescinded.

Yet in 2005, in a strange turn of events, Buckle himself became Metropolitan of British Columbia and Yukon, succeeding Crawley.

Bp Buckle’s offer of AEO followed Bp Ingham’s embrace of a revisionist agenda, which advocated the sexual revolution’s objectives of abandoning traditional Christian and Anglican teaching on chastity, marriage, family and homosexuality. The issue of sexual relations was the presenting issue, but the most important issue for evangelicals and traditionalists was the larger theme of replacing biblical authority with cultural accommodation.

Terry Buckle was born on Aug. 24, 1940 and spent his childhood in Simcoe, Ontario. It was there that he met his wife, Blanche.

Buckle was a server in the local Anglican Church and in his late teens felt a strong call to ministry, and was mentored by the local priest. He saw young Anglicans talking about Jesus at Church Army meetings and he too wanted to tell people about Jesus. At 20 he enrolled in the Church Army Training College in Toronto.

Commissioned as a lay Church Army Evangelist in 1962, he was Parish Assistant at St Philip’s, Etobicoke and then Director of Inner Parish at the downtown church of Little Trinity, Toronto until 1966.

While studying theology at Wycliffe College in Toronto, Buckle connected with Donald Marsh, the Bishop of the Arctic. Buckle was prepared to serve in the Arctic if that was where God wanted him. Bp. Marsh proposed he come to the Arctic and study for ordination under him.

Buckle was ordained deacon in May 1973 and priest in November of the same year. He was Priest-in-charge at the Church of the Ascension, Inuvik (and Regional Dean of Lower Mackenzie from 1975 to 1982) then Archdeacon of Liard until 1988.

He was Rector of Holy Trinity, Yellowknife from 1988 to 1993 when he was elevated to the Episcopate as Bishop Suffragan of the Arctic. Two years later he became Bishop of Yukon and a decade after that, Metropolitan of British Columbia and Yukon.

In June 2018, when Buckle relinquished the exercise of ministry in the Anglican Church of Canada and was received into the Anglican Network in Canada, ANiC Moderator Bishop Charlie Masters welcomed him saying:

“We are delighted to welcome such a godly, orthodox bishop, whom we have known for many years, into our midst. His partnership in the Gospel, his passion for the Gospel, his supportive friendship and his many years of experience in Christian service, and now his excitement about continuing to serve the Lord Jesus, will be a blessing to the future of the Anglican Network in Canada.”

Buckle served on the Board of Directors for Threshold Ministries and Anglican Renewal Ministries. He was also involved in Threshold’s street ministry called Sanctuary.

Bp Masters told TAP: “I always have been impressed by Bishop Terry’s love of the gospel. Literally right to the end, Terry was witnessing to the Lord Jesus with much joy and power even in the midst of much suffering through his illness. He was witnessing to Jesus to anyone and everyone, family and friends. His joy in the Lord and peace through suffering was such a witness to me.

In the hours after his death, many Anglicans posted comments on Facebook to express their condolences but also their love and admiration for Buckle.

Larry Robertson, formerly a suffragan bishop of the Arctic, later Bishop of Yukon and who now serves in a parish in the Diocese of Athabasca, remembered that his predecessor “had the ability to bring calmness in the middle of chaos. More than once in the National House of Bishops he was able to bring an angry yelling house to quietness with a few words. A man of God I will miss dearly.”

Bp Stephen Andrews, formerly Bp of Algoma and currently Principal of Wycliffe College, wrote, “Let it also be said that he was a man of courage and a source of encouragement and inspiration to many.”

Rev. Shawn Branch, who led Threshold Ministries for a number of years, was one of those many. “Terry taught me lots about leadership, grace and following Jesus. I was privileged to spend many hours talking with him, reflecting with him…We shared many laughs and prayers– he was a support during a difficult time in my ministry and life.”

Bp. Buckle also served as chaplain to the Zacchaeus Fellowship, a group of Anglican believers who struggled with same-sex attraction. Rev. Dawn McDonald who led the group said of Buckle, “He had an amazing gift of encouragement, and the only reason I am the priest that I am is because of him.”

Bp Buckle is survived by his wife Blanche, six adult children and several grandchildren. One of his children posted this on Bp Buckle’s Facebook page:

Dad had wanted to send one last message. Unfortunately, he passed away before he was able to share it with all of you.

From high school dropout to Archbishop.

This is not goodbye.

This is, See you later.