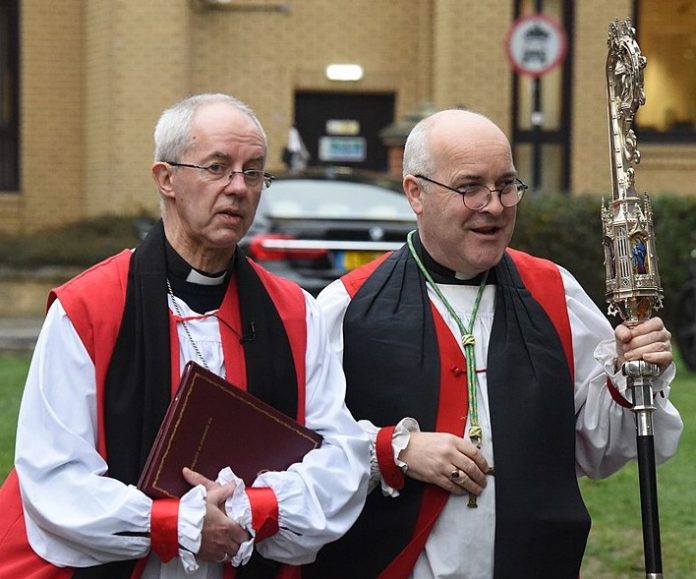 On 15 July Lambeth Palace Press Office issued a statement from Archbishop Justin Welby announcing, among other things, new arrangements for the consecration of bishops who do not accept the ordination of women. These protocols were agreed with Archbishop of York Stephen Cottrell after consultation with the Bishop of London and the House of Bishops.

That same day Will Hazelwood, Bishop-designate of Lewes, was consecrated in Lambeth Palace Chapel by Norman Banks, Bishop of Richborough, assisted by Bishop of Ebbsfleet Jonathan Goodall and Bishop of Fulham Jonathan Baker. All three consecrating bishops are members of the traditional catholic Society under the patronage of St Wilfrid and St Hilda, supported by Forward in Faith.

The concession of allowing a traditional catholic to be consecrated by bishops who do not consecrate or ordain women was made to Philip North by Archbishop of York John Sentamu in 2015. Last week’s announcement and consecration marks a regularisation of the practice. Archbishop Welby’s view that the new arrangements represent the Church of England ‘stepping forward’ in inclusivity is not shared by Chair of Women and the Church, Canon Emma Percy, who detects an unacknowledged ‘theology of taint’ in play.

Although we are repeatedly told that Forward in Faith does not adhere to a theology of taint, this is exactly what the rejection of consecration by the Archbishop or any other (male) bishop who has ordained women looks like. It is, we are told a theology of impaired communion and any Bishop or Archbishop can restore the communion with society priests and bishops by repenting of their support of women’s ministry.

In 2018 the Church of England’s Independent Reviewer, Sir William Fittall, accused the Parochial Church Council of St George’s, Headstone of articulating a theology of taint in its request that the bishop provided by the Bishop of London should ‘not merely be a man who ordains only males to the priesthood but should himself have been consecrated by someone who has not consecrated a woman as a bishop’. Ostensibly oblivious to five hundred years of Anglican practice, Sir William stated that it was ‘doubtful whether such a theology comes within the spectrum of Anglican teaching and tradition, even interpreted at its broadest’.

The Church of England does not need to be in full communion with another Church in order to accept the validity of its orders. Such is the case with the Anglican Church of North America, the Free Church of England, REACH-South Africa, and the Roman Catholic Church – through which Anglican orders are derived.

Traditional catholics have not considered themselves in full communion with most bishops of the Church of England since the ordination of women to the priesthood in 1994, even if – as in the case of Justin Welby and Stephen Cottrell – they accept their orders as valid. This fact, and the large number of parishes to have availed themselves of traditional catholic extended episcopal oversight – some 420 – has commanded a responsive, evolving provision. Two and a half years after the Establishment watchdog savaged a PCC for raising the outstanding issue of consecration, the Archbishops’ arrangements have enabled many traditional catholics to consider their place in the Church of England to be significantly more secure.

Similar arrangements will be used in future consecrations of conservative evangelicals, although they are more exercised by sex than ecclesiology (Rod Thomas seemed content with Justin Welby as his principal consecrator in 2015) and currently focussed on the outworking of the Living in Love and Faith process.

Last week saw the Church of England’s senior management deliver on a necessary aspect of facilitating mutual flourishing. But for both traditional catholics and conservative evangelicals the question remains how long Parliament, egged on by woke warriors, will tolerate its client church allowing a minority of adherents to practise and preach the prescriptions of historic Christianity.