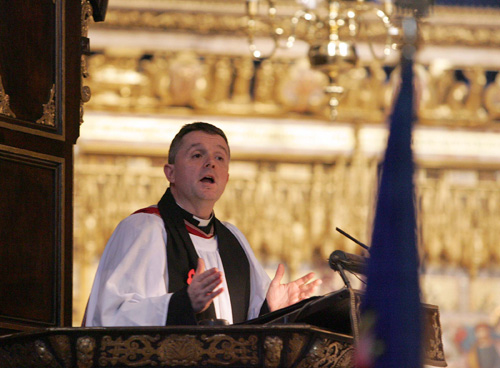 Though he has a track record of high-profile campaigning for political correctness in the Church of England, the Dean of Christ Church, Oxford, Martyn Percy, has been inclined to go off message. Is this the reason the increasingly Marxist CofE establishment has turned against him?

The British satirical and investigative magazine Private Eye has reported  on the decision by the CofE’s National Safeguarding Team to set up a ‘core group’  to investigate Percy, who is both head of Oxford University’s most prestigious college and senior resident cleric at the city’s cathedral, for alleged safeguarding failures. Percy’s enemies among the academics (called Censors) at Christ Church are the complainants.

According to Private Eye: ‘The dean himself is not represented on the Core Group, and not allowed to know who is on it or when it meets. But two of the complainants from the college, including Senior Censor Geraldine Johnson, are members. It is hard to see what the group can achieve. It can’t question the students whose safeguarding issues the dean allegedly mishandled, since they did not make any complaints and their identity is not known. It can’t ask the dean, since the students spoke to him in confidence.’

The Eye concluded: ‘The National Safeguarding Team has now asked Dean Percy to stand down during the inquiry, even though nobody believes he poses a risk to anyone. Professor Johnson has indicated that if Percy is still in post when the governing body next meets, she will put a notice on the college’s website to the effect that Christ Church’s safeguarding protocols are all robust except in respect of the dean – richly ironic, given that one of the Censors’ previous complaints about Percy was that he wanted them to take their safeguarding responsibilities more seriously.’

It would seem that the NST’s Stasi-like treatment of Percy follows a distinctly Marxist pattern of behaviour towards fellow revolutionaries inclined to independent thought.  That Percy has been a leader in the CofE revolution against traditional biblical orthodoxy cannot be doubted. In 2017 he was in the vanguard of the campaign against the Bishop designate of Sheffield, the Anglo-Catholic suffragan Bishop of Burnley, Philip North.

In article on the revisionist Modern Church website, Percy wrote that North’s opposition to female priests would ‘cause significant pastoral and public damage to the church’. He claimed there was a ‘substantial amount of resistance building up’ to North’s appointment, arguing that he should withdraw because his becoming a diocesan bishop would ‘represent the toleration of gender-based sectarianism’.

After a concerted campaign against North by female clergy in Sheffield Diocese and their male accomplices, Percy got his wish. North did not take up the role and the second choice for the nomination, the former Dean of Liverpool, Pete Wilcox, got the job.

But Percy has also criticised the culture of bureaucratic managerialism in the CofE. In 2016 he wrote an afterword in his book, The Future Shapes of Anglicanism, arguing that Archbishop Justin Welby’s ‘Renewal and Reform’ programme for the CofE was moving towards ‘centralised management, organisational apparatus and the kind of creeping concerns that might consume an emerging suburban sectarianism, instead of a national church’.

He wrote: ‘It will take more to save the Church of England than a blend of the latest management theory, secular sorcery with statistics and evangelical up-speak.’

He was blistering about Welby’s leadership, arguing that a cure for the ailing established Church ‘would require a much deeper ecclesial comprehension than the present leadership currently exhibit … There seems to be no sagacity, serious science or spiritual substance to the curatives being offered’.

He declared that the CofE ‘is being slowly kettled into becoming a suburban sect, corralling its congregations, controlling its clergy and centralising its communication. Instead of being a local, dispersed, national institution, it is becoming a bureaucratic organisation, managing its ministry and mission – in a manner that is hierarchically scripted’.

For the intellectual non-conformism on display in this withering critique, it would seem that Percy has earned the hatred of the CofE’s Politburo and is now paying the price.