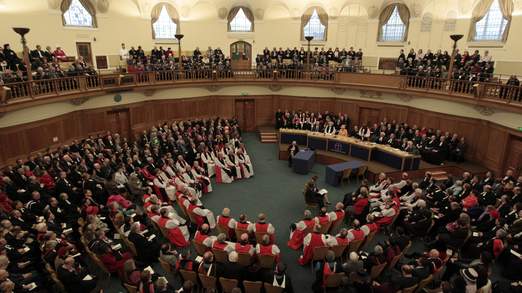 In the light of the cancelling of General Synod, may I point out that under its previous name and constitution: Church Assembly, it continued to meet during the Second World War, and that in fact Church House was formally opened by George VI at its meeting in June 1940.

Perhaps more importantly, great care was taken to prevent General Synod, formerly known as Church Assembly, from being seen as a creation of the state.

The Church was careful to exclude Parliament from its creation, and when both Convocations, which incidentally pre-date Parliament,  had fixed upon its proposed constitution, they appealed to King George V for permission to establish this National Assembly of the Church of England, a request which he granted, and allowed its independent creation.

Only after it had thus been independently established was Parliament then prevailed upon to give it additional civil powers by the passing of
the Enabling Act, that is The Church of England Assembly (Powers) Act 1919.  Among other things, this gave privileged access to Parliament for the passing of Measures for those matters requiring, in addition to its own inherent powers, the exercise of Parliament’s powers.

Thus in changing its name, altering its constitution and receiving from the Convocations, powers formerly exercised by the Convocations, it
sought Parliament’s ratification by the passing of the 1969 Synodical Government Measure, to ensure its civil powers and privileges continued unchallengeable.

Given all this, will it not set an unfortunate precedent should General Synod allow some of its members to influence Parliament or the Privy
Council to unilaterally impose alterations in its constitution without them first being proposed and agreed upon by a free meeting of General
Synod itself?  Especially as we are now moving back to more normal times?