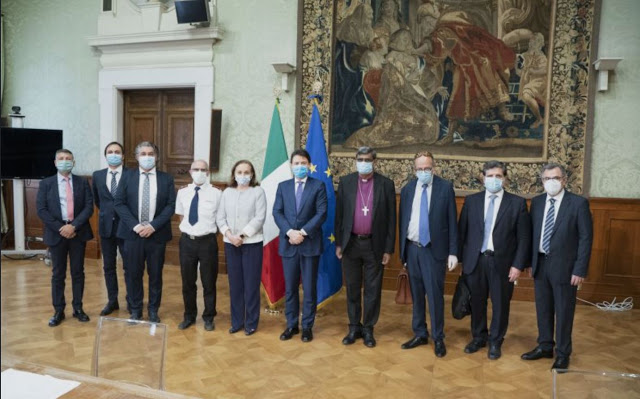 The Anglican Centre in Rome opened on Monday 18 May for the first time since Italy went into lockdown. But it will be months before life will return completely to normal, with only limited numbers of visitors, limited access to religious services, and no courses for the time being. The Centre’s Director Archbishop Ian Ernest reassured friends and supporters of the Centre that these were the first steps of re-opening and that this is a time “to seize opportunities” and to “develop a greater sense of creativity.”

Strict public health protocols will have to be followed at the Centre to help ensure that Rome and the rest of Italy does not endure the further spread of the coronavirus. By Sunday night, Italy was reporting an increase of 875 new cases and 153 deaths on the previous day’s figures, increases of less than 0.4% and 0.5% respectively, marking a significant decline in the spread of the disease and of fatalities.

For the foreseeable future, only visitors with appointments will be able to enter the Anglican Centre, based in the Palazzo Doria Pamphilj, and only those who are Covid symptom-free and have not been in contact with people with the disease. Anybody with a body temperature of 37.5 degrees C or higher will not be allowed in, even if they have an appointment.

Although churches in Italy have been allowed to re-open for services, the small spaces of the Centre’s Saint Augustine’s Chapel mean that the Tuesday Eucharist cannot be held with worshippers present for the time being. The usual community lunch will also not take place for the moment. From this Tuesday, May 19, Archbishop Ernest will celebrate the Tuesday Eucharist from 12.45 to 1.20pm and worshippers can attend via Zoom.

Then from June 1, the Tuesday Eucharist will be held with worshippers present but according to the new protocols. Holy Communion will be offered but distribution will made according to strict regulations decided by the Churches and the Italian Government. Those who are distributing Communion will wear a mask and disposable gloves. The Centre’s protocol says that “the celebrant and any extraordinary minister …will take care to offer the bread without coming into contact with the faithful” – which is likely to mean dropping the host into the communicant’s hand.

From that day, the community lunch will be replaced by a takeaway meal offered by staff and volunteers.

Visitors will also have to be especially careful, with the Centre asking them to abide by the strict measures required by the Italian state’s public health officials:

“It is sad that most of our plans and projects for this year are postponed. The projects to raise funds seem to be more challenging but our faithfulness and commitment to our vision and mission are being reaffirmed as the world needs, more than ever, the guidance of the Church. The Church has, over these past two months showed, how it could bring people together even at a distance. It has kept its calling as the Body of Christ to be a light to the world and salt to the earth. Whatever be our church tradition, the Church in its ensemble, is now called to support, in a Christ like manner, a new way of life which hopefully will marginalize our greed and self-centred motives.”

On Friday 15 May, Archbishop Ian represented the Association of English Churches when he signed a protocol concerning the measures for the reopening of Churches drawn up by the Italian Government.  Signing took place at a meeting arranged by the Ministry of the Interior at the Palazzo Chigi, with the Italian Prime Minister Giuseppe Conte present (6th on the left to Archbishop Ian in the main photo).  Representatives of other Christian denominations were also present, together with Muslim, Jewish and Sikh leaders.

The signed protocol at the Palazzo Chigi for the gradual reopening of Anglican, Evangelical and Protestant Churches can be read here

During lockdown, Archbishop Ian has continued to celebrate the Tuesday Eucharist and has sent orders of service and reflections to those who regularly attend as well as other supporters. The Order of Service for these virtual Tuesday Eucharists can be found here. He has been maintaining contact with the Centre’s Board of Governors, Lambeth Palace, the Anglican Communion Office and Vatican officials. Lockdown has also given him time, he said, to study the Centre’s archives and fully understand the Centre’s history.

“Now, as we are looking forward to celebrate the fifty-fifth anniversary of its existence in 2021 and to renew our commitment to our vision, it is proper that new strategies be designed in order to adapt ourselves to the new challenges and realities emerging from this unparalleled situation we are living in,” he said.

Churches in Rome and throughout Italy have also been re-opening, as well as shops and museums. The Italian army was drafted in to help disinfect churches in time for the re-opening. The Anglican Centre will also be regularly disinfected to help combat Covid-19.