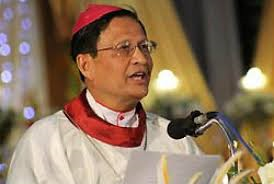 Myanmar’s Cardinal Charles Bo has called on China’s regime to apologise and offer compensation to the world for the damage caused by the coronavirus pandemic, saying that “lies and propaganda have put millions of lives around the world in danger”.

Writing in UCANews Cardinal Bo, Archbishop of Yangon, says: “There is one government that has primary responsibility for what it has done and what it has failed to do, and that is the CCP regime in Beijing.”

He argues: “Through its inhumane and irresponsible handling of the coronavirus, the CCP has proven what many previously thought: that it is a threat to the world. China as a country is a great and ancient civilization that has contributed so much to the world throughout history, but this regime is responsible, through its criminal negligence and repression, for the pandemic sweeping through our streets today.”

Cardinal Bo, who is also President of the Federation of Asian Bishops Conferences, concludes: “The Chinese regime led by the all-powerful Xi Jinping and the CCP — not its people — owes us all an apology and compensation for the destruction it has caused. As a minimum, it should write off the debts of other countries to cover the cost of Covid-19. For the sake of our common humanity, we must not be afraid to hold this regime to account.”

He also criticises China’s human rights record, noting that “in recent years, we have seen an intense crackdown on freedom of expression in China. Lawyers, bloggers, dissidents and civil society activists have been rounded up and have disappeared. In particular, the regime has launched a campaign against religion, resulting in the destruction of thousands of churches and crosses and the incarceration of at least one million Uyghur Muslims in concentration camps. An independent tribunal in London, chaired by Sir Geoffrey Nice QC, who prosecuted Slobodan Milosevic, accuses the CCP of forced organ harvesting from prisoners of conscience. And Hong Kong, once one of Asia’s most open cities, has seen its freedoms, human rights and the rule of law dramatically eroded.”

Cardinal Bo emphasized that it is the CCP, not the Chinese people, who should be held responsible. “Let me be clear — it is the CCP that has been responsible, not the people of China, and no one should respond to this crisis with racial hatred toward the Chinese,” he writes.