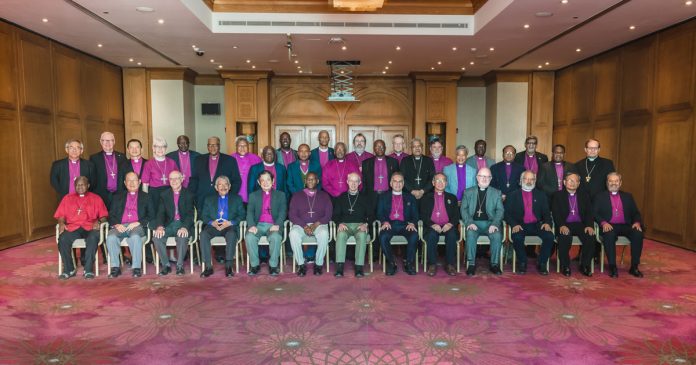 From January 13-15, 2020, Primates (Archbishops, Presiding Bishops and Moderators) from 33 of the 40 Provinces of the Anglican Communion were present for a Primates Meeting convened by Abp. Justin Welby, the Archbishop of Canterbury, in Amman Jordan. Three of the Primates missing were the Gafcon Primates from Nigeria, Uganda, and Rwanda, who properly absented themselves in protest of the false teaching and lack of discipline within the Anglican Communion. The Primates of the Anglican Church in North America and Igrejia Anglican do Brasil were not invited, even though they have been recognized and authenticated by both Gafcon and the Global South. Primates who sit on the Gafcon Primates Council and in the Global South were present at this gathering.

Many expressed dismay at the outcome of this meeting, specifically at the apparent agreement of Gafcon and Global South Primates concerning the following outcomes:

During the press conference following the Primates Meeting, a question was asked about Gafcon’s formation of the new Confessing Anglican Church of New Zealand arising out of the crisis of false teaching and lack of discipline within the Province of New Zealand. Archbishop Welby stated unequivocally that “no one brought up those subjects.” Archbishop Justin Badi of South Sudan, the new Chair of the Global South, affirmed Welby’s statement: “Our coming to the meeting was not to discuss the formation of new churches [by Gafcon],” he said. “The main aim was to discuss how we move forward as an Anglican Communion and to prepare ourselves for the Lambeth Conference and our fellowship together.” Although there was “considerable discussion” around the issue of what Anglican identity means, the Primates agreed specifically that it is rooted in relationship with the See of Canterbury and “generous inclusivity towards those who use the name ‘Anglican’ within that framework.”

To whatever degree the Gafcon Primates agreed with that last statement, it is a contradiction of the Jerusalem Statement authenticating Anglicanism as rooted in the faith once delivered to the saints (Jude 3) and not necessarily as having to be in relationship with Canterbury.

Overall, the social media photos of their fellowship, the statements in their Communique, and the press conference further the narrative that all is well in the Anglican Communion, because everyone is walking together despite deep and irreconcilable differences over the authority and clarity of the Bible and Apostolic tradition.

The senior Gafcon leader present at the Primates meeting, Archbishop Greg Venables, gave his report on January 24 over a week after the Primates meeting and its Communique. During this interview, he states that at the meeting there was much discussion among the Primates, and “everyone was clear that the differences are fundamental and major, that we are in a broken state of communion and that we haven’t been able to find a way forward. We talked freely about how all attempts so far haven’t been followed through.”

This statement is impossible to reconcile with the statements of Archbishops Welby and Badi. The question remains: Whom should we believe, and on what basis?

There are other unanswered questions as well:

Unless and until these Gafcon and Global South Primates publicly differentiate themselves from the Communique and the press conference statements, we must agree with those who have concluded that this Primates Meeting is a significant setback for Gafcon’s and the Global South’s leadership.

In the past, the American Anglican Council was present at Primates Meetings and other Communion meetings to provide briefings to Gafcon and Global South Primates and Bishops. Our ministry at these meetings was to provide documentation of false teaching and the “facts on the ground,” in order to contradict the false and misleading narrative offered by the Episcopal Church and repeated by the Anglican Communion Office. We provided briefings and space for worship and prayer for Biblically-faithful leaders. There are times when our briefings have enabled Biblically-faithful Primates to stand firm in the official meetings and resist the false and misleading narratives.

One commentator and friend raised the question publicly: Was the American Anglican Council present at this 2020 meeting of the Primates ? [Watch the commentary here].

I can answer that question. No, we were not invited to be in Jordan, nor did we provide any briefings for the Gafcon and Global South Primates. Even if we had been there, however, would it have made any difference?

The twin problems of Primatial turnover and lack of discipline make it unlikely, but I do believe there is a way forward for Biblically-faithful leaders in Gafcon and the Global South to guard the faith once delivered to the saints (Jude 3) for the sake of Gospel mission and ministry within the Anglican Communion. Let me explain.

Twelve new Primates attended this Primates Meeting in Jordan—12 out of 40, almost a third. None of them have the Anglican Communion Secretariat, staff, and administrative resources at the disposal of the Archbishop of Canterbury. Many of them are coming to grips with the complexities of the Anglican Communion for the first time—including the crisis of false teaching and lack of discipline within the Communion on matters of human sexuality and church leadership. In other words, there is by definition an imbalance of power between every other Primate and the Archbishop of Canterbury and his staff the moment they walk into such a meeting.

This imbalance is aggravated by the constant turnover of Primates, virtually all of whom are “term-limited” by age and/or Constitution. The Anglican Communion Office and its strategy, however, are never term limited. As I wrote back in February 2019 (their 2019-2025 “Strategic Plan for the Anglican Communion” includes a redefinition of Anglican identity that assumes an abandonment of the Biblical confession of faith found in our Anglican formularies and that the Bible cannot be read in a plain and grammatical sense authoritative for all. There are, therefore, no limits to Anglican diversity. This is exactly what happened in Jordan, when at the press conference Anglican identity was described as a “generous inclusivity within a framework,” including the “specific requirement of relationship to Canterbury” rather than adherence to the clarity and authority of the Bible.

Unless there is a continual education of new Primates by those who can document the departures of Anglican churches from Biblical faith and practice—like TEC, Canada, Scotland, Wales and New Zealand—those new Primates will always find themselves at a disadvantage with only the narrative provided them by the Archbishop of Canterbury and his staff.

The Primates of Nigeria, Uganda and Rwanda, all members of the Gafcon Primates Council, properly boycotted the meeting in Jordan. They did so for all of the reasons I wrote about in these two articles that show why bishops should follow the Apostle Paul’s example and absent themselves from such meetings. This would include Lambeth 2020.

Those reasons include the unrepentant consecration and participation of bishops in same sex-unions at such meetings; the lack of any affirmation of the Bible’s clarity and authority for decision making among Anglicans; no limits to Anglican diversity, provided that a church is in relationship with Canterbury; an agenda of the meetings defined, organized, and reported on by Canterbury; no provision for Biblically-faithful Anglicans to provide a dissenting report to the Communique; and a photo-op at the end with the Archbishop of Canterbury that will be used to bolster the narrative of “walking together” in agreement. Since there is no current authority within these diminished councils of the Church at the global level that says “No” to false teaching or takes any discipline against those spreading it, the Primates of Nigeria, Uganda and Rwanda properly followed the Apostle Paul’s admonition with regards to meetings that welcome such false teachers: “Have nothing to do with them.” (2 Tim.3:6)

At the same time, we must acknowledge, in the words of the Cairo Covenant, section 2.1.8 (Watch the video in our series on the Cairo Covenant here), that “tensions and dislocations amongst orthodox Anglicans can arise over differences of strategy.” We recognize that there are Biblically-faithful leaders in both Gafcon and the Global South who sincerely believe that they should go to meetings like the Primates Meeting in Jordan and Lambeth 2020 in order to confront false teachers and stand up for Biblical and apostolic faith. The American Anglican Council understands that position; we held it for many years in our hope that we could reform TEC from the inside out. With great intent, discipline, resources and organization before, during, and after the Triennial meetings of TEC General Convention, we made our witness and we took our stand until there was no hope of reform.

We learned during that time that one has to show up early, be the last to leave, take control of the agenda when possible, prepare and organize ahead of time to confront false teachings with the truth, hold our own press conferences to report the truth, and issue a statement at the end, even if it is a dissenting minority report of what actually happened and its implications. It takes planning and discipline.

To all those Biblically-faithful leaders in Gafcon and the Global South, who believe in participating in the diminished and deteriorating councils of the Anglican Communion, if only to stand for Biblical and apostolic faith, please hear this: If you attend any more Anglican Communion meetings, observe the following commitments, for the sake of Christ:

These commitments will require a high level of collaboration, cooperation, and communication between Gafcon and Global South leaders before, during, and after such meetings. In short, they will require discipline.

Are the Gafcon and Global South leaders who wish to continue attending Communion meetings willing to take these steps?

The Way Forward for Gafcon and Global South

In June 2020, Gafcon is hosting a gathering for Bishops who are choosing not to attend Lambeth 2020, and for those bishops who subscribe to the Jerusalem Declaration (2008) but are choosing to go to Lambeth 2020—for all the reasons stated above. The Gafcon Kigali Bishops Conference will be an inspiring time of worship, Biblical teaching on the office of a Bishop, prayer, and fellowship. The theme of the conference, Consecrated to Christ, promises to encourage Biblically-faithful Anglican bishops to remain steadfast in their calling to lead God’s people in proclaiming Jesus Christ faithfully to all nations.

This is a Kairos moment, an immediate and timely opportunity for those bishops gathered in Kigali to exercise their unique authority in our Communion of Anglican Churches. Bishops have the unique office and authority of not only proclaiming, but guarding the faith and order of the Church. What if the Bishops gathered in Kigali not only received wonderful teaching on their office, but exercised it by reaffirming their teaching authority as follows:

Finally, I close with a plea from an article published by the AAC in June 2019 on “Casting a Biblical Vision for Human Freedom and Dignity”. In addition to the four teaching points above, our plea is that faithful Bishops meeting in Kigali would address the underlying issue that is driving so much false teaching in the Communion about gender, sexuality, and “human flourishing,” especially in those Anglican churches gripped by the forces of secularizing cultures.