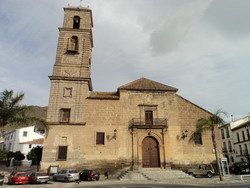 The Roman Catholic Diocese of Malaga has censored one its clergy for permitting a female Anglican priest to concelebrate the Eucharist at an All Saints Day service in Alora. On 1 Nov 2019 Fr., Juan de Jesus Baez, pastor of Iglesia de la Encarnacion in the Andalusian town of Alora, invited an English ex-pat, the Rev. Jenny Lancaster, a retired Church of England priest who holds a permission to officiate from the Diocese of Newcastle to assist at the altar.

After photographs appeared on the internet of Ms. Lancaster holding aloft the chalice next to Fr Baez, the diocese reprimanded Fr. Baez and issued a statement reminding Catholics that non-Catholics were not permitted to receive the sacraments, nor were Ms Lancaster’s orders recognized as licit.

Allowing the English priest to serve at the altar was an “ambiguous gesture” the diocesan statement said, noting:“Eucharistic communion and the possibility of concelebration is only contemplated among the faithful who are in full ecclesial communion. Catholic priests and ministers of churches or non-Catholic Christian communities cannot participate jointly in a Eucharistic concelebration.”

The statement went on to say: “The Diocese of Malaga feels very much the damage that this gesture may have caused to those who do not know the doctrine on the matter and to whom it may have created confusion.”

“May our prayer and ecumenical commitment help us to overcome our differences, until one day we can celebrate together the sacrament of communion,” the state said.

Fr. Baez accepted full responsibility for the incident, saying:” I am very fond of Reverend Jenny. She is a woman of God.”

However he added: “I am very repentant. I ask for forgiveness from God and the Church. I am surprised by all the upset it has caused; I have unwittingly sinned.”