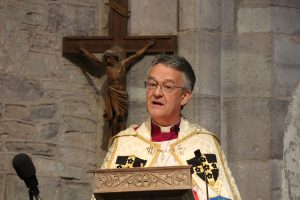 Archbishop John Davies warned that diminishing resources at a time of increased demand were creating a crumbling infrastructure which was neither “right nor just”. Conditions in some prisons “beggared belief” with some prisoners facing the prospect of longer sentences, while magistrates’ courts had, in many places, been “airbrushed from the scene”, removing relevant local knowledge and insights about communities.

For justice to be administered correctly it needed to be “properly and seriously resourced, decently supported and highly respected”.

The Archbishop, a former solicitor himself, addressed lawyers at a service in Llandaff Cathedral marking the opening of the Legal Year.

He said “Regrettably, it seems to me, that nowadays many of you are called to undertake these important and noble tasks in a frequently contradictory context, a context of increasing demands, alongside diminishing resources, ever tighter budgets, shrinking entitlement to legal aid, and crumbling infrastructure. And by infrastructure I mean not only court buildings, but also some prisons, conditions in which beggar belief, and are an indictment of any society which claims to call itself civilised; prisons in which, if the government has its apparent way, some people will be spending rather more time than at present they might expect. That can’t be right. That can’t be just.”

He added, “At many a local level, where for several years in the past I plied my trade as a criminal solicitor, magistrates’ courts have vanished, airbrushed from the scene, removing from the judicial process, presumably in the interests of economy, much relevant local knowledge, many local insights about communities, their people, their peers, their pressures, their failings. Important local matters, not least in the process of proper and appropriate sentencing. That can’t be right or just either.

“So, there are pressures on the system and upon those who, like you, try to make it function properly, justly, or at least just adequately. What you do, what you are called to do, what you are required to do is plain; equally plain are the increasing difficulties.”

Archbishop John used examples from the Bible to show how wisdom, mercy and rehabilitation were key elements of justice.

“Most of those who come before our courts would wish to be and ought to be dealt with by others who have wisdom and a creative understanding of the effects which mercy can have. And rehabilitation when possible must not only be a stated aim, but also a properly resourced and deliverable one.”

Urging that every case and every individual before the courts should be viewed and dealt with as unique, the Archbishop added, “Each case which comes before you is different and unique; each individual whom you judge, with whom you deal, is different and unique; each case and each individual must be treated as such. Things will have been done by wrongdoers which might revolt, repel and demonstrate individual personal badness and cunning. But let me also suggest that such things also demonstrate individually acute sickness of being, of mind and of particular circumstances, which are the product of the many flaws with which our society and humanity itself is plagued and afflicted. Some who come before you may be so sick in mind, their deeds so terrible, that rehabilitation or healing is plainly not possible. That much we must admit. But all wrongdoers who come before the courts, like it or not, are our frail brothers and sisters, and, for the majority who come before our courts, those courts should think wisdom, think mercy and think rehabilitation.”

The Archbishop, who had previously expressed some of his views to Lord Thomas of Cwmgiedd during the course of his inquiry into the administration of justice in Wales, concluded that, “Administering justice is what you do, and you must always strive to get it right. In striving to do so, both you and the system of which you are such a vital part deserve to be properly and seriously resourced, decently supported, and highly respected.”