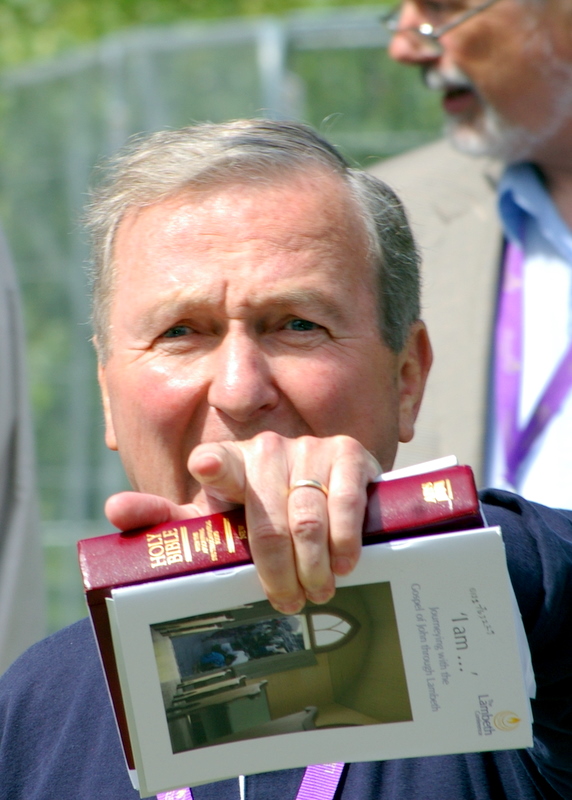 After many years of faithful service as Episcopal Bishop of Springfield, Illinois, Bishop Peter Beckwith, Rear Admiral in the United States Navy Reserve and the former Hillsdale College Chaplain, died on Oct. 4 at the age of 80, just one day after the dedication of Hillsdale College’s dedication.

“In the chapel there is a dedication to him. It says ‘In thanksgiving for Peter Beckwith and his service, class of ‘61,’” Professor of History Kenneth Calvert said. “And I saw that on the day of the dedication and then he passed away the next day. He’s the first funeral in the chapel and his name is right up there.”

Beckwith was born Sept. 8, 1939, in Battle Creek, Michigan. In 1961, he graduated from Hillsdale College with a Bachelor of Arts degree and was a member of the Delta Tau Delta fraternity. In 1965, he married Melinda (Foulke) Beckwith. He then got his Master of Divinity from the University of the South Sewanee, as well as a Master of Sacred Theology from Nashotah House Theological Seminary. Beckwith served as the Episcopal Bishop of Springfield, Illinois, for 18 years before he retired in 2010. He also served as a chaplain for the Illinois State Police until his passing.

In 2014, Beckwith was appointed as an Assisting Bishop for the Anglican Diocese of the Great Lakes in the Anglican Church of North America.

Beckwith also served in the Chaplain Corps of the United States Navy Reserve for 27 years. He gained the rank of Rear Admiral and retired in 1999 as the Deputy Chief of Chaplain for the Total Force.

After his retirement in Illinois in 2010, Beckwith returned to Hillsdale, and though he was 71 years old, he faithfully served not only as the college’s chaplain, but also as chaplain for Hillsdale Academy, from 2010 – 2016.

Hillsdale College President Larry Arnn remarked that Beckwith was known for his humor, careful in his judgements, and devoted to his faith and country.

“He was friendly to everyone I ever saw him meet,” Arnn said in an email. “The bishop was in a fraternity when a student here, and I enjoyed seeing him with his fraternity brothers from back in the day: they held him in respect, and one could tell they did back in college, too.”

Arnn also noted that he learned an important lesson from Beckwith to “Listen carefully. Try to make sure one knows precisely what is being said and the motive behind it. Then answer kindly on all occasions, even if the answer is no.”

Calvert, former headmaster of Hillsdale Academy, said he always appreciated the friendship and support he received from Beckwith over the years.

Long before Beckwith was the college’s and academy’s chaplain, Calvert remembered meeting him at the Episcopal church.

“Here was a guy who really was focused on the right things in the faith and really impressed me,” Calvert said.

“He hated to use a microphone. So he would step away from the pulpit and kind of walk up and down the aisle. The Academy chapels are pretty formal affairs, but he would be like this evangelical preacher, walking away from the pulpit and walking up and down the aisle,” Calvert said. “And sometimes he would slip into his admiral persona, like he was talking to a bunch of sailors.”

And personally, Calvert was struck by the genuineness and care that Beckwith showed.

“He would always take the time on Wednesday mornings after chapel to come to my office at the Academy and sit and ask how I was doing,” Calvert said. “And if there is one thing you need as the head of a K‑12 school, it’s a lot of prayer. So he would come and just sit and talk and ask me how I was doing and listen and pray for me and pray for the school and for the kids.”

“Veterans just loved Pete,” Calvert said. “And he could order Jeff Rogers around. You know Rogers is a navy man but below Beckwith.”

Associate Dean of Men Jeffery Rogers said he will truly miss Admiral Beckwith and fondly remembered his exhortations of “let us pray.”

“He was a sailor’s sailor. He was very philanthropic. I will forever remember his kindness and generosity,” Rogers said in an email.

Beckwith was known for his outgoing and loving personality as well as his firm beliefs.

Rick became the college’s chaplain in 2016 after Beckwith retired, but even before coming to Hillsdale, Rick knew of Beckwith since he was known nationally and even internationally for his commitment to classical Christian orthodoxy in the Episcopal church and his attempts to stem the tide of liberalism in the Episcopal church. After retiring as the Episcopal Bishop of Springfield, Beckwith was received into the Anglican Church in North America and appointed as an Assisting Bishop for the Anglican Diocese of the Great Lakes.

Rick said Beckwith was active until the end in his duties and faith and “he never rested from his labors.”

Rogers remembered that prior to his death, Beckwith told him that death is something that we will all face.

“He has now reported for duty at his last duty station,” Rogers said.

Beckwith’s funeral will be held in Christ Chapel on Friday at 11 a.m. and is open to all. Rt. Rev. Ron Jackson, bishop of the Anglican Diocese of the Great Lakes, will preside over the service.