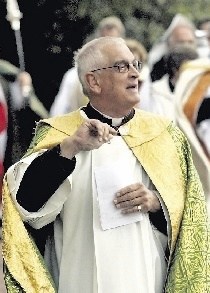 The former dean of Newcastle (Australia) has been sentenced to up to eight years imprisonment for the rape of a 15 year old boy. On 16 October 2019 Newcastle District Court Judge Tim Gartelmann said Graeme Lawrence had shown no remorse for his crimes and ordered he be jailed for four and a half years before he would eligible for parole.

In July Lawrence was found guilty of aggravated sexual assault and aggravated indecent assault against then 15-year old Ben Giggins. After a concert in the cathedral Lawrence brought his victim back to his private quarters in the deanery and showed him pornographic photos before sexually assaulting him.

In his comments from the bench Judge Gartleman said “the offender must have known the victim did not consent but persisted regardless.” After the victim was able to escape his abuser, the judge said the evidence showed Lawrence shouted “Don’t go telling anybody, you’re just a boy and I’m the Dean. No one will believe you.”

In his victim impact statement Mr. Giggins said the incident had left lasting damage, and that he continued to suffer from depression and related physical ailments.

Lawrence had been brought up on charges before the Newcastle Professional Standards Board for sexual abuse and misconduct and on 15 Dec 2010 the board found that he had engaged in sexual relations with a 17 year old man at a church camp in 1984.

Lawrence, who served as Dean of Newcastle for 25 years until his retirement in 2008, was a member of the Anglican Church of Australia General Synod Standing Committee task force that in 2003 created the recommendations for the current professional standards proceedings.

Lawrence was arrested in 2017 following a referral from the Royal Commission into Institutional Responses to Child Sexual Abuse for allegedly indecently and sexually abusing a 15-year-old boy in 1991.

He was charged in 2017 with aggravated indecent assault on a victim under the age of 16 and aggravated sexual assault and convicted after trial last July.