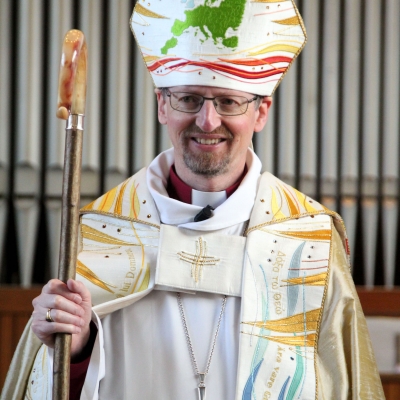 In Belgium we are celebrating great news:

After a process which has taken 20 years, begun by Dirk van Leeuwen and Robert Innes during their time as presidents of the Anglican Central Committee in Belgium, the current president, Jack McDonald, has managed to steer through the Belgian Parliament a clause in a bill which gives the Anglican Church a full-time salaried chaplain-president and a full-time salaried secretary.

HM King Philippe gave his assent to this bill in July this year. The thanks for this development undoubtedly and chiefly lie with Prof. Koen Geens, Minister of Justice in Belgium (and a colleague of Jack’s in KU Leuven), who has been a constant support to all the Recognised Religions. Jack continues as chaplain-president, and the Anglican Central Committee (composed of Jack, Paul Vrolijk and Stephen Murray) has appointed the Revd Jo Jan Vandenheede as its first full-time secretary.

Jo Jan is a Fleming, a doctoral student in theology and a priest of the Lutheran Church in Great Britain, and therefore in full communion with the Church of England through the Porvoo Communion. He has Bishop Robert’s Permission To Officiate (PTO).

Jack and Jo Jan (pictured) are looking forward to offering to our ten chaplaincies in Belgium a bespoke administrative service, along with full Anglican representation at the various dialogues and bodies of which Anglicans are members by virtue of our legal recognition. Once this new system beds down, there will be obvious benefits for us in terms of how the Archdeaconry of NW Europe is funded and serviced.

Congratulations to all concerned!