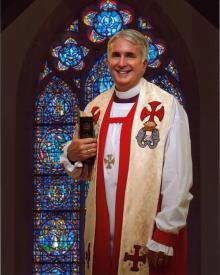 Dear clergy of the Diocese of Central Florida:

At the fall meeting of the Episcopal House of Bishops, we did not serve our people well.

Recently, in preparation for the upcoming global Lambeth Conference of bishops, a decision was made at Lambeth Palace to forbid same sex spouses of gay bishops from attending. Reactions in the House of Bishops were relatively uniform. Almost no one thought this was good idea. Only one bishop spoke in favor of the decision to bar gay spouses. Even several of our more conservative members spoke against it saying they, too, did not favor the decision. After all, one said, it is the bishops who took vows for the episcopate, not their spouses. It is the bishops who should be held accountable.

The bishops were all over the map about how to respond to this decision. The bishops
decided to send a communication to the Episcopal Church entitled “A Message of Love and Solidarity from the Bishops and Spouses to The Episcopal Church.” The letter says that while we “cherish the bonds of love with our Anglican siblings” some in our House of bishops are “troubled” by the decision to not include gay spouses. Therefore, the decision has been made to both write about this trouble and to honor those who, because of conscience, could not attend.

Two thirds of those gathered voted for it with one third either voting against it or abstaining. All of the Communion Partner Bishops present voted against it, myself included. In our discussions I said that while the letter was a “true” expression of how many felt, I could not support it. I made the point of saying that none of us took ordination vows to be a bishop in the Episcopal Church and the Anglican Communion on our own terms. If we’re in, we’re in. Dissension is permitted, even encouraged. But we are called to stay at the table even as dissenters. Our calling is to be witnesses, even if our witness is ignored.

In my opinion, the “message” that was published was not leadership and it is completely lacking in any sense of statesmanship appropriate to our position as bishops. It says, in essence, we love our fellow Anglicans but we’re angry about the decision so we are leaving it up to individual bishops to decide how they will respond. It seems that the very best we can do is honor personal “conscience.” So each one is allowed to do what is right in one’s own eyes (not a laudatory position). At present, we have no capacity to say “it seems good to the Holy Spirit and to us.”

Frankly, I am grieved and embarrassed. My wife and I still plan to go to the Lambeth Conference – joyfully. We are coming both to learn and to serve. We are looking forward to seeing many friends, planning and praying together with sisters and brothers from across the world. We will give thanks for those present and grieve for those who are staying away – both from the Episcopal Church as well as from other members of our Communion. And we trust that we will be enriched by all that we have in common, serving together for the Gospel of Jesus Christ.