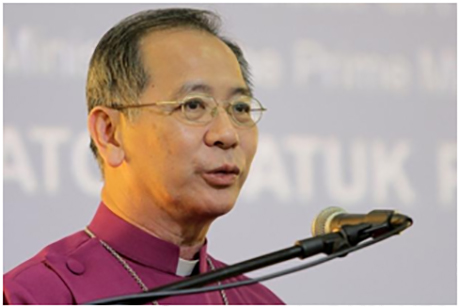 A new directive from Malaysia’s Department of Islamic Development (Jakim) barring muslims and non muslims from praying together has been criticised by the Archbishop of South East Asia, Ng Moon Hing.

The Archbishop said the directive was confusing and would lead to further polarisation between faiths.

He said: “I think the Malaysian government has contradicted themselves. On one hand the Malaysian King (Yang Di Pertuan Agung) and the Prime Minister has recently again in the King’s birthday speech and PM in his Independence (Merdeka) speech emphasised Inter – faith and cultural relationships and dialogues and gatherings for the harmony of the nation, and on the other hand such a directive banning muslim and non muslim praying together is ridiculous and confusing.”

The directive from the committee to promote understanding and harmony between religions was issued last week. It stated that on the advice of the Federal Islamic Affairs Department (Jakim) both types of prayers should not be held in the same programme.

Such prayers should instead be “replaced with an activity where a message of unity is shared”, it stated.

The Archbishop said: “For the past century, Malaysians and during pre-Malaysia days, there were no problems at all, even at government functions. I believe this directive is going against the very harmonious (muhibah) spirit of the nation and will polarise the nation further. I don’t understand how praying together could create discrimination and disrespect, instead the opposite, respect and appreciation will result.”

According to a state minister in one area of Malaysia the recommendation from Jakim doesn’t apply. Assistant Minister in the Chief Minister’s Office in charge of Islamic affairs in Sarawak, Abdul Rahman Junaidi said praying together was part and parcel of the state’s policy of religious tolerance and that in Sarawak, everyone prays together.