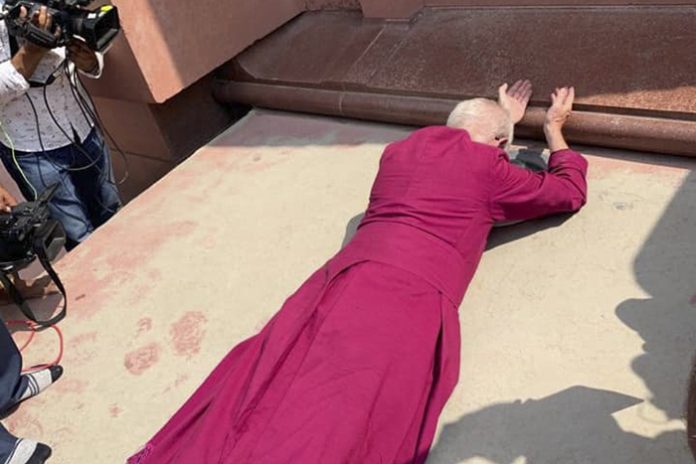 Learning from the past is essential to prevent further atrocities like the Jallianwala Bagh Massacre, the Archbishop of Canterbury said, following his visit to the memorial site in India this week.

Archbishop Justin Welby has been travelling around key sites in India for the past 10 days at the invitation of the Churches of North and South India.

He was pictured lying prostrate in front of the memorial commemorating 100 years since the tragedy, when thousands of unarmed Indians of many different faiths were shot by British troops in 1919.

He said: “Coming here arouses a sense of profound shame at what happened in this place. It is one of a number of deep stains on British history. The pain and grief that has transcended the generations since must never be dismissed or denied… We have a great responsibility to not just lament this horrific massacre, but most importantly to learn from it in a way that changes our actions … The past must be learned from so nothing like this ever happens again.”

The visit to the Massacre site in Amritsar came towards the end of his trip, which began in Kerala, where he prayed with Christians from the Church of South India.

Speaking after his visit to Kerala he said: “I’ve been praying with Indian Christians today. It’s an extraordinary reminder that every time this happens, that despite national differences, different languages, all sorts of differences of history and culture, that when we come to Jesus Christ we are united.”

The Archbishop, who was joined on the visit by his wife Caroline Welby, said the purpose of his visit was prayer, pilgrimage and pastoral concern and that he was visiting as a religious leader to pray with Christians, to learn about Christianity in India and to share their experiences. On his fourth day in the country he spent time with the Church of South India’s Sisters Order and Women’s Fellowship in Bengaluru and said he had been inspired by their devotion and their “vital work among poor, oppressed and marginalised women and children.”

At St Paul’s Cathedral in Kolkata, the Archbishop was taken to the cathedral’s Friendship Centre who reach out to those in need from any faith or background. He said the centre was another example of the Church of North India’s commitment to those suffering from trauma, grief or other struggles. “The centre offers that simple, precious and rare gift: a safe space to be listened to and prayed for,” he said. “The world needs more of these places.”