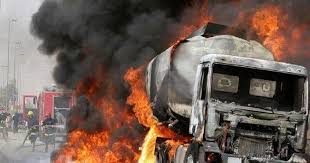 Anglican leaders in Uganda and Tanzania have taken part in two interfaith services following deadly fires that errupted in the wake of fuel tanker truck accidents.

The latest accidents occured in Western uganda and Central Tanzania. On Sunday 18 August on the road from Kampala to Kasese a tanker truck overturned and crashed into a jitney bus and two cars. Twenty-three people were killed in the crash and in the subsequent fire that caught some victims gathering fuel from the accident.

The Chief Administrative Officer for Rubirizi District James Luyimbazi told the Daily Monitor he expected the death toll to rise. One of the vehicles involved in the accident was a bus with 17 passengers, he said, adding “about 25 people are unaccounted for, so we haven’t established the exact number of people who have died in the tragedy.”

Anglican, Roman Catholic and Independent church leaders along with Muslim clerics held a join prayer service on 2o August 2019 for the survivors and the families of the dead at the Kyambura Playground.

On 10 August 10 2019 at last 89 people were killed and dozens injured when a tanker truck overturned in Morogoro, approximately 100 miles west of Dar es Salaam. Witness statements collected by the Tanzanian press said the truck was traveling a high speed when it swerved to avoid a motorcycle on the highway. The driver lost control of the truck and it overturned.

Though the accident involved a truck and a motorcycle, the fatalities arose when a fire erupted, igniting the spilt fuel. Press reports state 89 fuel scavengers were burnt to death in the fire and subsequent explosion and several dozen others were badly burned.  The Anglican, Lutheran and Catholic churches have offered their condolences and support to the families of the victims and survivors, and have urged the government to improve road safety to prevent future accidents.