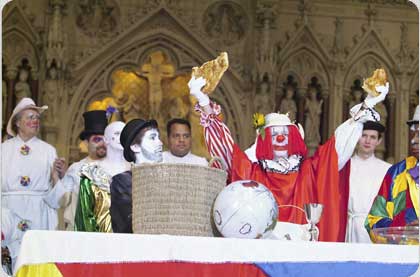 Three Anglican cathedrals have set out to increase both their appeal to the  public and to get more people into the building.

One has chosen a gin festival, another has built a mini golf course over the flagstones where pilgrims have knelt in prayer since the 7th century, and one has built a helter skelter at the heart of the building.

Pretty predictably, there have been two sets of responses. One group has hailed these as imaginative imitative which will catch the imagination of the public, and make the buildings seem a little more relevant to people who otherwise would not give the faith of the cathedral a second thought; and the other group has protested that the cathedral authorities have misunderstood the purpose of the buildings and their relationship with the public

In every generation the Church faces a live or die challenge. Convert or be converted. Act as an agency for people to encounter the Living God and be forgiven, turned and transformed; or fit into the unforgiving contours of a society that is driven by other forces, other appetites, and smear over their agenda a patina of spirituality that confers a thin covering of political and cultural legitimacy.

There have been moments in history when the church’s failure has been tragically treacherous. The blessing of guns destined to kill Christian German cousins a hundred years ago in the name of the Christ who challenged his followers to meet evil with good and turn the other cheek still burns in the recent memory.

The unquestioning presiding over the hanging, drawing and quartering of elderly Catholic priests guilty of nothing more than baptising the faithful into the Church that carried the Gospels to these islands and celebrating discreet house masses presented as acts of national, political treason still casts a pall of shame across our collective historical memory.

When Jesus went to the cross to bear the sins of humanity he faced not only murder, but mockery. The soldiers had fun at his expense, before they killed him.

Both guns and scaffolds have been the  instrumentation of murder, but mockery is no more acceptable just because it is not murder. The trouble with the  helter skelter and the pitch and putt is that to anyone with a sense of what Rudolf Otto called ‘the Holy” they constitute an offence of some gravity.

Why should this be?

The Bible offers a narrative of a wide variety of encounters with God. They have the effect of telling us what God is like; and what happens when we encounter him in the raw.

These encounters can be nuclear. For Moses at the bush that would not burn, the first requirement was to remove his shoes. Bare foot and bare souled, we cannot hide from the searchlight of the God who knows all our thoughts and motivations.

Moses was to discover later that on the mountain he could not look on the face of God and live.  Isaiah was to encounter God in a vision in the temple, and survived his commission by either literally or figuratively having a live coal held to his mouth to purify it.

In the presence of Jesus, when he began to grasp who Jesus, Peter fell to his knees and explained “depart from me for I am a sinful man”.

St Paul left an encounter with the risen Christ blinded in sight and reconfigured in the heart.

As the letter to the Hebrews puts it “It is a fearful thing to fall into the hands of the living God.” (Hebrews 10).

The Church has the difficult business of conveying the awe, majesty and sheer danger of God while at the same time offering the safety, the healing, the forgiveness and the mercy of Christ.

This creative tension between transcendence and immanence is a challenge to hold in creative tension, but it reflects the complexity of human experience and the judgement of mercy of God.

One of the characteristics of our astonishing Norman cathedrals is the way in which the architecture does just that. It lifts our minds and our hearts to the intimation of majesty grandeur, awe, immensity and by the difference in scale, our own insignificance by contrast. And at the same time offers us the presence of Christ as Lord and Saviour, who asks to be invited into the depths of our heart to forgive, heal and recreate in an act of the most profound metaphysical intimacy.

A pre-requisite for an encounter with God is a willingness to encounter Him. Not all moments in our lives are equally propitious, as not all places are either.

But to enter a cathedral is to walk into a building that physically represents an immense image of Christ on the cross, arms outstretched in the north and south transepts, with head slightly tilted in exhaustion and suffering towards the high altar.

The building itself has the capacity to speak at so many levels to the mind and the soul for anyone who walks in willing to make themselves vulnerable to an encounter with the living God.

There is one thing and one thing in particular that can break this alchemy, distraction.

We live in a culture addicted to distraction and pleasure seeking. The dynamics of this are potent antidotes to experiencing the presence of God. They are everywhere. We experience a saturation of stimulation and distraction in everyday life. It is almost if the pace and pleasure of life set out to make reflection and prayer impossible.

The one place one might be free of this could be, ought to be a cathedral.

But for such a place, steeped in mystery and marvel to buy in sensory pleasure and distraction is to poison the very  medicine it offers the human soul. It cracks the exquisite mirror it holds up before the presence of God; it drowns out the still, small voice, that Elijah encountered and adored.

Faced with the challenge to convert or be converted, the Church of England appears to be willing to surrender to the preoccupations and preferences of the lost people it was sent to save. But since it may no longer believe in heaven and hell, salvation and judgement, it may have downgraded itself to be a distracting, source of spirituality, offering distraction and entertainment  rather than healing to sick souls.

It may well be religion, but not as Jesus knew it, taught it, commissioned it or recognises it.